ONE Dota 2 WPI Group Stage Day 1 results: EG pull off an amazing comeback to secure the 2-0 against VG

Evil Geniuses had one of the best comebacks of the tournament in game two of this series. 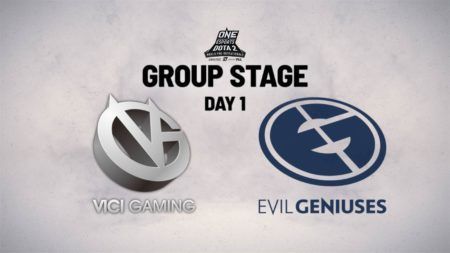 Group B of the ONE Esports Dota 2 Singapore World Pro Invitational kicked off with the highly anticipated match between Evil Geniuses and Vici Gaming.

The North American squad made a strong case for being one of the favorites to win the tournament by defeating Vici Gaming 2-0, with an amazing comeback in game two.

Evil Geniuses started game one with a Blood Seeker for Artour “Arteezy” Babaev, a Templar Assassin in the middle lane for Abed “Abed” Yusop, and a Doom Bringer for Roman “Ramzes666” Kushnarev.

The first game of the set had an even start with both teams making timely hero rotations that produced some exciting moments during the early game. But once Abed made his sidelane rotations, EG started gaining an advantage.

VG struggled to pick up kills throughout game one, and by the 30-minute mark, the Evil Geniuses squad were sieging the Dire base, which was the beginning of the end for VG.

In game two, EG changed things up by giving Arteezy a Sven and Abed a Razor. VG opted to draft heroes that were popular before the Outlanders patch was released with Ori on Queen of Pain, and a hard carry Gyrocopter for Eurus.

VG took the early game advantage against EG by dominating all the lanes. Ramzes666 and Abed struggled to reach the top of the net worth charts against VG.

Early on, VG looked fully in control and were well on their way to tying up the series with EG’s heroes failing to make an impact during early team fights.

But at the 20-minute mark, EG began to gain momentum, starting with a convincing team fight win.

VG was able to claim the Aegis of the Immortal, but it cost them their buybacks and they failed to take down Arteezy’s Sven.

EG took back the lead from VG and tried to claim the first set of Barracks from game two. This forced VG to spend their buybacks again to repel EG out of the Dire base.

EG completed their comeback victory against VG by winning a team fight in the Dire jungle. VG knew that if EG secured the Aegis of the Immortal the game would be over. This forced the Chinese squad to spend their buybacks again, and EG preemptively attacked the rotating VG squad that caused the game to end.