ONE Dota 2 WPI Group Stage Day 1 results: Team Secret gets the 2-0 over J.Storm

Team Secret move to the top of Group A with 4 points, alongside Alliance. 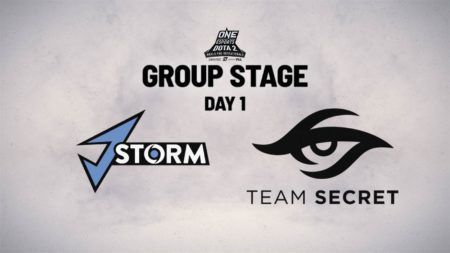 European team Team Secret faced off against American squad J.Storm on Day 1 of the Group Stage of the ONE Esports Dota 2 World Pro Invitational.

While J.Storm put up a valiant effort, Secret emerged victorious in both games.

With magnificent drafts from both teams, this match was one of the closest of Day 1.

The early game saw a perfect rotation from J.Storm when David “Moo” Hull’s Timbersaw was being chased down by three of Team Secret’s members in the bottom lane.

However Team Secret were able to recover and with a persistent split push led by Michał “Nisha” Jankowski’s Morphling kept the pressure on J.Storm. While J.Storm were able to hold on, eventually, the American team was forced to call GG at the 53-minute mark.

While the first game was fairly close, the second game was a total stomp for Team Secret, who grabbed control early and maintained it throughout the game.

They finished off J.Storm just before the 30-minute mark, taking the precious two points and putting them at the top of Group A along with Alliance.