A faltering PSG.LGD could do little against an EG squad that are looking like one of the favorites to win the tournament. 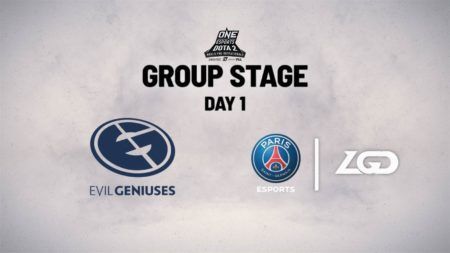 LGD opened game one with a tri-core of Tiny for Wang “Ame” Chunyu, a mid Puck for Lu “Somnus `M” Yao, and Brewmaster for Yang “Chalice” Shenyi while EG opted for comfort picks with Artour “Arteezy” Babaev on Gyrocopter and Abed Azel “Abed” Yusop on Storm Spirit.

The laning phase ended with both teams on relatively even footing, but EG quickly sprung to action to take control of the game once Arteezy and Abed got their core items.

EG held map control and was able to easily claim Roshan, but PSG.LGD took an ill-advised fight shortly after that only served to further their opponents’ lead. It didn’t take long for EG to close the game out, with Arteezy even ending it in style with a rampage.

EG ran a tri-core themselves in game two, with Abed on Storm Spirit again while Arteezy was put on Phantom Lancer and Roman “RAMZES666” Kushnarev got Legion Commander. Meanwhile, PSG.LGD looked to bounce back with Ame on Troll Warlord and Somnus on Shadow Fiend.

EG threw a wrench at PSG.LGD’s game plan by shutting down Somnus’ Shadow Fiend in the early game, all while Arteezy and Abed had free rein to farm. The Chinese squad was eager to force a fight to get their momentum going, but EG repeatedly outmaneuvered and picked them off.

The game slowed down from there, with EG content to farm and further their lead while PSG.LGD scrambled to find an opening that never presented itself. An Aghanim’s Scepter pickup on Abed’s Storm Spirit swung things heavily in EG’s favor, with their opponents left virtually powerless to stop them from claiming the series sweep after 37 minutes.

EG end Day 1 with a clean 4-0 record, with both wins coming against the top Chinese teams, and are tied for the top spot in Group B with Gambit Esports. Meanwhile, PSG.LGD continue to be in an apparent slump to start the season as they lost all of their games for the day.