An improved VG force a tie against group leaders, Gambit. 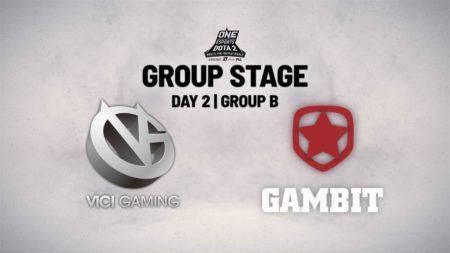 Chinese team Vici Gaming managed to take a game off of surging CIS squad Gambit Esports to keep themselves in the running for a spot in the Main Event from Group B of the ONE Esports Dota 2 Singapore Invitational Group Stage.

VG opened the series with a strong ranged-core duo of Drow Ranger for Zhang “Eurus” Chenjun and Shadow Fiend for Zeng “Ori” Jiaoyang.

Meanwhile, Gambit countered with a highly-aggressive and mobile composition, with Kiyalbek “dream ‘” Tayirov on Terrorblade, Danil “gpk” Skutin on a mid Puck, Maxim “Shachlo” Abramovskikh on an offlane Batrider, and Danial “XSvamp1Re” Alibaev on a position-4 Doom.

Gambit dominated the laning phase off the back of XSvamp1Re’s highly-effective roaming Doom and multiple courier snipes, including one gank that saw three VG courier’s go down in less than 10 seconds. With Ori’s Shadow Fiend utterly shut down, a lot of pressure was put on Eurus to carry his team as their opponents repeatedly ran them down in fights.

With VG’s cores starved for farm and virtually rendered powerless, it didn’t take long for Gambit to tear down their defenses and take game one in 26 minutes.

VG looked to bounce back in game two with a strong tri-core of Razor for Eurus, a mid Kunkka for Ori, and Legion Commander for Zhou “Yang” Haiyang.

Gambit opted for a Tiny-Wisp combo for dream and XSvamp1Re, with gpk on Shadow Fiend and Brewmaster for Shachlo.

VG put a lot of pressure on gpk’s Shadow Fiend, but unlike Ori in game one he came out of the laning phase leading his team in terms of farm. However, they were able to slow down his momentum by winning a drawn-out engagement under Gambit’s bottom tier-one tower and nabbing five crucial kills.

However, Gambit was able to put themselves in a winning position by claiming Roshan right under VG’s nose and winning the ensuing teamfight.

The tides turned again when VG caught Gambit on the retreat after taking top rax, with Eurus getting a triple kill that was key in making his Razor the strongest hero in the map. Despite the CIS squad’s best efforts, they simply could not stand up to VG’s strong tri-core and were eventually forced to call GG at the 40-minute mark.

Gambit now has a 5-1 record, second-best in Group B just behind Evil Geniuses (EG), and are in good position to start the Main Event from the Upper Bracket. They will be looking to solidify their lead when they go up against EG and PSG.LGD later today.

Meanwhile, VG improve to 3-3 and are also set for the Main Event, although they look bound to start from the Lower Bracket. They will be looking to wrest an Upper Bracket berth from Gambit in their next matches against PSG.LGD and Natus Vincere.