ONE Dota 2 Singapore Invitational Group Stage Day 2: Alliance gets the 2-0 over Virtus.pro

Alliance look like one of the favorites for the tournament, taking a dominant 2-0 win over VP. 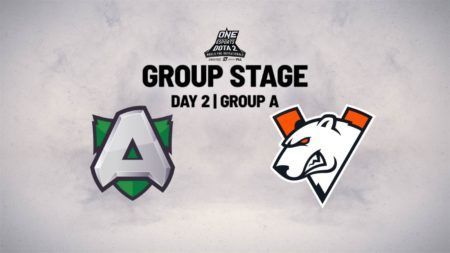 Things got off to an exciting start for Day 2 of the ONE Esports Dota 2 Singapore World Pro Invitational as DreamLeague Season 12 champions Alliance and Kuala Lumpur Major titleholders Virtus.pro faced off against each other.

After a slow start to the game, the action picked up in the middle to late game, with Alliance slowly taking control of the map.

A crucial clash at the 30-minute mark saw Nikolay “Nikobaby” Nikolov’s Slark tried to take down Vitalie “Save-” Melnic’s Skywrath Mage, while the whole of Virtus.pro was distracted chasing down Alliance members.

With unstoppable power emanating from Nikobaby’s Slark, Alliance took the first game of the series against Virtus.Pro.

The amount of damage from the Slark was one of the keys to Alliance’s victory on the first game, and so Nikobaby decided to pick the melee hero once more. Similar to Game one, Nikobaby was unstoppable once his Slark reached the late game.

In the final clash, three of Virtus.pro’s members went down, giving Alliance the opportunity they needed to push for the Ancient. Unable to defend, VP were forced to call GG.

Alliance remains at the top of Group A alongside Team Secret, while Virtus.pro stay in third place, tied with TNC Predator.