Secret didn’t break a sweat as they dominated TNC to start Day 2 of the Group Stage. 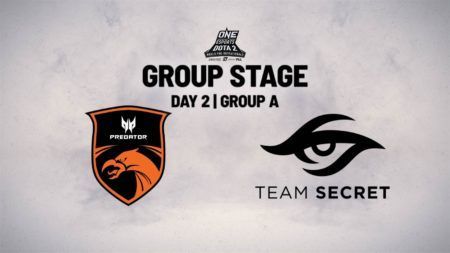 TNC opened the series with a signature core duo of Morphling for Kim “Gabbi” Villlafuerte and Ember Spirit for Armel Paul “Armel” Tabios. Secret opted for Ursa for Lasse “Matumbaman” Urpalainen, a mid Magnus for Michal “Nisha” Jankowski, and with Ludwig “zai” Wahlberg on an offlane Ancient Apparition to counter TNC’s Morphling.

Secret handily won the laning phase off the back of a strong trilane with zai on top lane that put a ton of pressure on Gabbi early on, all while Matumbaman and Nisha were left to farm uncontested.

Secret’s excellent start allowed them to threaten Roshan early, with TNC’s attempts to contest leading to a disastrous teamwipe that only furthered the European squad’s lead. Secret eventually claimed the Aegis for Nisha at the 17-minute mark, who then led them in the ensuing siege of the TNC base.

While TNC were able to hold off Secret’s first attempt to breach their defenses, they could do little to stop Nisha’s Magnus from mowing them down in a pivotal clash in the midlane. Secret then proceeded to close the game out at the 32-minute mark, with Nisha notably finishing with 799 gold per minute (GPM) and a stellar 16-0-8 KDA.

Secret picked up a strong tri-core in game two, with Matumbaman on Morphling, Nisha on Templar Assassin, and zai on an offlane Earthshaker — with Clement “Puppey” Ivanov getting Treant Protector for the second-straight time.

Meanwhile, TNC looked to bounce back with an offbeat lineup of Gabbi on a safelane Shadow Fiend, Armel on Ember Spirit, and Damien “kpiip” Chok on Legion Commander — with Park “March” Tae-won on an unusual Position 5 Beastmaster to counter Secret’s Treant Protector pick.

TNC went with an unusual lane setup to counter Secret’s stronger laning composition, with March starting in a trilane down bottom then moving to help Gabbi in the top lane. That gambit did little to stop Secret from snowballing, however, as they proceeded to assert their dominance early once more.

When Secret started posturing to take Roshan early, TNC dug down for a 5-minute long standoff to contest them. Despite their best efforts, TNC were unable to stop them from claiming Aegis and securing another huge lead.

TNC could do little to stop Secret from taking over most of the map, with most of their attempts to break out continually being punished. A huge three-man Echo Slam by zai caught TNC just outside of their base and was enough to secure the 2-0 series sweep for Secret.

Secret continue to look like one of the favorites to win the tournament, leading Group A with a 7-1 record and all but assured of an Upper Bracket berth at the Main Event.

Meanwhile, TNC are in danger of an early exit with a 3-5 record. The struggling Chengdu Major champions need to win their last matchup of the Group Stage against Virtus.pro and have both Team Aster and J.Storm to finish with a worse record than them to even make it to the Main Event.

READ MORE: Here’s the schedule for Day 2 of the ONE Esports Dota 2 Singapore World Pro Invitational