Both teams remain at the bottom of Group A with a 2-4 record. 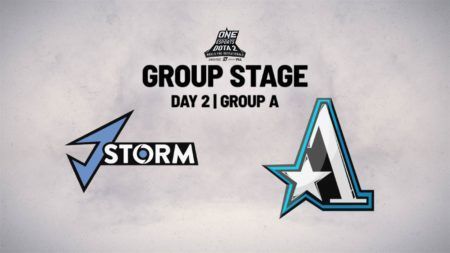 The action continued on Day 2 of the ONE Esports Dota 2 Singapore World Pro Invitational Group Stage with a best-of-two match between J.Storm and Team Aster, with both teams fighting for their tournament life.

Both J.Storm and Team Aster earned a game off each other, which gives them a chance to advance to the Main Event if they manage to win their last match of the day.

To start the series, both J.Storm and Team Aster have adjusted to the meta and banned popular heroes like Doom, Puck, and Viper, who dominated Day 1 of the Group Stage yesterday.

Team Aster won the laning stage of the first game and in response, J.Storm decided to group up their five heroes early and get key pick-offs. The American team’s rotations didn’t give them the mid-game advantage, but they were able to defend their bottom tier two Tower against Aster.

Once the game reached the 35-minute mark, both teams were desperate to take a commanding lead so they decided to burn their buybacks to win key team fights.

Team Aster ended the stalemate and secured a convincing gold lead against J.Storm. With an Aghanim’s Scepter on Song “Sccc” Chun’s Slark, J.Storm’s heroes were easily locked down and picked off, which gave Team Aster the game one victory.

For game two, Team Aster drafted a safe lineup with Centaur Warrunner, Viper, and Morphling with two healer supports with Chen and Winter Wyvern. On the other side, J.Storm went with a range draft timing push with the Drow Ranger, Vengeful Spirit, and Shadow Fiend.

J.Storm tried to set the pace of the game with their early game rotation at the middle lane, but the Chinese squad was able to bring in their reinforcements to help keep Sccc alive and punish their opponents aggression.

After winning the first team fight of the game, Aster decided to go for a smoke gank attempt that J.Storm countered. With two disastrous Aster hero rotations, J.Storm took a commanding lead of the game and claimed the first set of Barracks.

Team Aster tried to stay in the game by getting quick pickoffs against the Radiant heroes, but the Chinese squad had no answers for David “Moo” Hull’s Drow Ranger who completely shredded the Dire heroes.

Moo abused his first farmed Boots of Travel item by teleporting back to base to heal up, and quickly rejoining the fight to deal even more damage against Team Aster.

With both teams winning one game each, they now continue in Group A with a 2-4 record.