Nine shone a light on how strong the hero is. 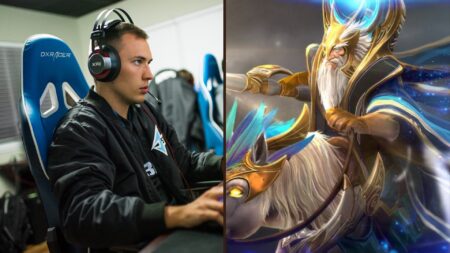 Credit: Valve, Beyond the Summit

Tundra Esports just introduced the latest way to cause chaos in pub games with their Keeper of the Light core.

Leon “Nine” Kirilin played the hero mid in their first match against T1 and pulled off an absolutely stunning performance.

Tundra Esports is undefeated in the ESL One Fall 2021 thanks to their innovative drafts and teamwork. This is the same team that just lost out on qualifying for The International 10 after losing 2-3 to OG.

Nine has changed the midline before with Winter Wyvern

Tundra Esport’s mid lane, Nine, is one of the most creative players in Dota 2 who constantly finds ways to use new heroes in mid.

He has a similar style to OG’s Topias Miikka “Topson” Taavitsainen. Both players are known for their ability to draft unorthodox heroes into the midlane. For Nine, this started with Winter Wyvern mid.

Winter Wyvern has always been a decent hero at dealing damage. However, players prioritized her healing ability and team fight ultimate, which put Winter Wyvern squarely into the support role.

Nine showcased how strong Winter Wyvern’s damage output can be, and did it against OG no less.

Tundra Esports first picked the hero in the drafting phase, making T1 think it was a standard Keeper of the Light support. As such, it came as a big surprise when the hero went mid instead.

Keeper of the Light has been significantly buffed in Dota 2 patch 7.30. Illuminate now only takes three seconds to fully charge up, making it easier to land the nuke on enemies.

This allows Keeper of the Light to farm more efficiently around the map, especially when targeting multiple creep camps.

Keeper of the Light is one of the fastest heroes in the game, with 330 starting movement speed. His ultimate provides an additional 30% movement speed.

Nine decided that was still too slow, and opted for Boots of Travel, the biggest movement increasing item in Dota 2, along with the ability to teleport everywhere.

Besides optimizing the hero’s mobility, Nine also went for multiple Null talismans into a Dagon to burst enemy heroes down. This combination of items made him a mobile and deadly threat.

Nine ended the game with an impressive score of 16-1-14, as Tundra made the hero look unstoppable. It’ll be interesting to see if Keeper of the Light becomes a staple mid-pick after this.

Tundra Esports is currently playing in the ESL One Fall 2021. You can watch the tournament on Twitch.