Everything you need to know about Hoodwink

Let’s see how this cheeky little lass is fitting into the Dota 2 life. 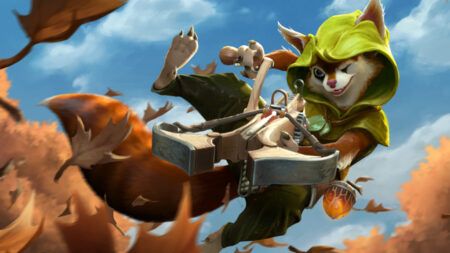 Funnily enough, Valve left a massive teaser for us in the Diretide trailer. If you take a look at picture on the left side of Snapfire’s newspaper, you can clearly see Hoodwink’s silhouette! Don’t worry if you missed it, a lot of us did too.

According to Valve, Hoodwink is a ranged agility hero who can burst heroes down with spells, has an aoe disable and a nifty little escape ability.

Hoodwink’s first skill is a powerful nuke that becomes more deadly as her foes group up.

Launching an acorn from her crossbow, just like Witch Doctor’s cask, the acorn will bounce to nearby targets applying a slow and causing bonus physical damage. Keep in mind the acorn applies a 100% slow, it does not stun so it won’t be able to cancel channeled skills like Enigma’s Black Hole or Crystal Maiden’s Freezing Field.

If you target the ground instead of a hero, Hoodwink’s acorn will sprout a tree then continue to bounce to any nearby heroes. This tree can also be used to block pathing if you’re juking in the trees and obstruct vision in the middle of a team fight. Get creative because most heroes can’t cut trees down without the help of tangoes or a quelling blade.

Hoodwink throws a net trap that will pull, stun, and damage enemies to the nearest tree. All targets caught in the net will also have their vision radius reduced to 0 for the duration of the stun.

Bushwhack is such an insane disable as it can help set up for any kind of aoe follow up like Lina’s Light Strike Array or a Hoof Stomp from Centaur Warrunner.

Be mindful of where you throw your net, if there aren’t any trees nearby then the stun won’t connect. You can use Acorn Shot to sprout a tree if a fight breaks out in an awkward location.

There are two components to Hoodwink’s Scurry ability.

Whilst near trees, Hoodwink will gain evasion to physical attacks thanks to Scurry’s passive. You’ll know the passive is triggered by a green aura surrounding Hoodwink.

If Scurry is manually triggered, Hoodwink gains extra movement speed, tree walking and phased collision. Meaning Hoodwink can walk right through trees, heroes, and creeps but not scale cliffs. Scurry acts as a pretty versatile skill since it allows Hoodwink to escape incoming ganks, chase down injured heroes and even reposition in the middle of a team fight.

You thought that was it? Nope, Hoodwink can keep two charges of Scurry on hand like how Mirana is capable of storing three leap charges.

Hoodwink channels then shoots a huge single target nuke that will hit the first target in its path. The bolt will do more damage the longer it is channeled, reaching maximum damage at three seconds of channeling. On impact, the bolt applies the break effect and slows the enemy hero. The duration of these effects are also influenced by how long it’s channeled.

In a pinch, you can even use Sharpshooter to scale up or down cliffs as Hoodwink gets knocked back 350 units after releasing the bolt. Normally you’d want to save Sharpshooter as a finishing move or for the break effect in a fight but hey, you gotta do what you gotta do to survive too!

What does the Dota 2 community think of Hoodwink?

Us fans weren’t the only ones who were excited for Hoodwink’s release, plenty of Dota 2’s streamers and talent wanted in on the Hoodwink action after the patch dropped. Many coming out as new Hoodwink mains, you can’t blame them either, she’s too dang fun to play!

New heroes will always either be too strong or too weak upon release. In Hoodwink’s case, she was a tad too powerful in the nuking department and many agreed including Dota 2 streamer Gorgc.

Acorn Shot was just way too powerful out the gate. Unlike regular magical spells that had fixed damage values, Acorn Shot was scaling with Hoodwink’s own attack value. Top that off with having a fairly low mana cost , long cast range, and reasonably short cooldown, nerfs were definitely heading Hoodwink’s way. Oh yeah, it can also trigger item effects such as chain lightning from a Maelstrom and even the passive from the new item Mage Slayer. Crazy stuff for one skill eh?

It took Valve less than a day to tone her down a little. Acorn shot’s number of bounces and bonus damage was reduced alongside Hoodwink’s base Agility. Bushwhack took a minor hit as well with both cast range and spell radius being nerfed. Finally, Hoodwink’s armor corruption talent was reduced from -5 to -3.

Is Hoodwink in a better place now? I asked Waga and he seems to think that Hoodwink is in a much more balanced place for now. The question that remains in how well will Hoodwink transition into competitive games? She’s not available in captains mode yet so we’ll just have to wait and see.

I’ll admit that I was disappointed when I saw Hoodwink’s character design and skill kit. I immediately figured she was just a cheap Windranger clone based off her appearance and mechanics alone. I’m glad I was proven wrong, sure there are a lot of similarities between the two but Hoodwink feels different enough to be her own hero.

We’re still in the early days of the new patch so expect to see more secrets and surprise Hoodwink mechanics reveal themselves to us. If you haven’t already, do give Hoodwink a shot. She is a treat to play, as long as you lock her in first during the drafting screen!

READ MORE: The WataTank is a blanket designed specifically for gaming