She rocked the stage. 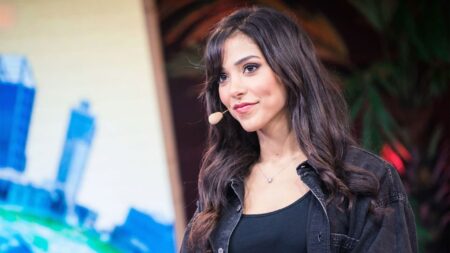 The International 10 (TI10) hosted an All-Star match on the second last dasy of the tournament that included broadcast talents facing off against each other.

This year’s match was played in All Random Death Match, and pitted the English Talents against the Russian Talents.

Ephey has been a long-time Dota 2 streamer on Twitch. She made the transition into professional casting this year and debuted at the WePlay AniMajor in June 2021.

Since then, Ephey worked at ESL One Fall 2021 and OGA Dota PIT Season 5: China as an analyst. She is also a member of the English broadcast for TI10, and played alongside her fellow English talents on Team Dragon.

The game mode for TI10’s All-Star match was All Random Death Match. The special thing about this mode is that it randomizes the hero a player is using whenever they die. In order to win, the team will need to either reach 45 kills or destroy the enemy’s throne.

Ephey started the match on Chaos Knight and made an effective gank squad with her teammates. She was able to tank multiple spells for her ally, BSJ, who cleaned up with a triple kill on Dark Willow.

Ephey’s death led to her respawn on Arc Warden, and following that, Keeper of the Light.

Ephey used Keeper of the Light to secure her team an important fight at the top lane where she landed a fully channeled Illuminate that almost instantly killed Sergey “Smile” Revin’s Enchantress.

Playing a total of 10 heroes in the game, Ephey tied with BSJ, syndereN, Smile, and Oleksandr “XBOCT” Dashkevych for most heroes played in the game, including Timbersaw, Bristleback, Phantom Assassin, Oracle, Riki, Abaddon, and Spirit Breaker.

Ultimately, the match went to the Russian talents on Thunderhide. It was a fantastic showing by both sides, and one of the best All-Star matches played at The International.

Team Thunderhide will be playing against Team Golem on the last day of TI10. Dota 2 fans can find the roster for Team Golem here.

READ MORE: Moxxi makes history as the first woman to PBP cast at The International