The All-Star teams were very talented this year. 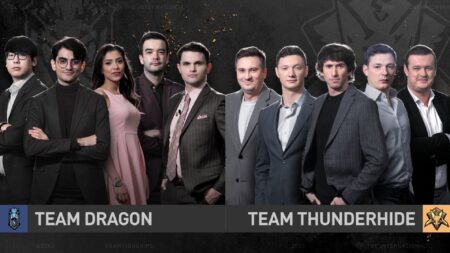 Every year during The International, Valve hosts an All-Star match. These games are played on fun modes available in Dota 2.

This tradition has given Dota 2 fantastic memories to look back on, such as the 10 vs 10 match at TI5, and the All Random Death Match mode featured in TI9.

The International 10 (TI10) did not include any players from the pro teams for the All-Star match. Instead, TI10’s match pitted English Talents against the Russian Talents in an All Random Death Match.

What is All Random Death Match?

Dota 2 has multiple modes for players to enjoy. One of these is All Random Death Match, which is available for casual play.

All Random Death Match randomizes the hero a player is using whenever they die. In order to win, the team will need to either reach 45 kills or destroy the enemy’s throne.

Unlike other matches at TI10, the All-Star match did not have any casters casting the game but instead included audio from the players as they competed in the match.

Team Dragon started strong, but Team Thunderhide pulled out a great strategy in the late game

Team Dragon, led by iNSaNiA, decided to put one hero in every lane, and have two heroes roaming. They also decided to rotate player roles depending on which heroes each player has.

This strategy worked well for them early, and allowed BSJ to score a triple kill for his team on Dark Willow.

However, Team Thunderhide got lucky in their hero death rotations when ARS-ART received Bounty Hunter. Bounty Hunter was perfect for them due to his invisibility and bonus gold from kills.

Team Thunderhide maximized their Bounty Hunter advantage by getting multiple Dagons to burst enemies down. This led to a favorable 3-2 fight at the midlane for Team Thunderhide.

In the mid game, Team Dragon was behind by three kills but also scored a perfect team fight lineup with Winter Wyvern, Naga Siren, Enigma, and Dawnbreaker.

The fight went well for Team Dragon, after they secured four kills, but at the cost of permanently losing Ephey and syndereN for the rest of the TI10 All-Star match. This put Team Dragon at a big numerical disadvantage

Team Thunderhide was able to use their numbers advantage and take the game-winning fight after, an explosive finish to one of the best All-Star matches played at The International.

After the match, Jake “SirActionSlacks” Kanner had a mock interview with the players of Team Dragon, and did not hold back his thoughts on the performance of Team Dragon at the All-Star match.

Team Thunderhide will be playing against Team Golem on the last day of TI10. Dota 2 fans can find the roster for Team Golem here.

READ MORE: Team Secret’s YapzOr: ‘I just click this weird spell and hope for the best’