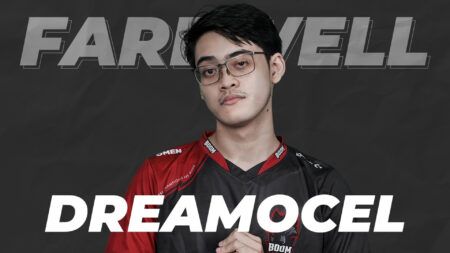 Dreamocel joined BOOM Esports’ Dota 2 roster back on January 30, 2017, as one of the team’s first players together with Saieful “Fbz” Ilham. The team quickly rose up the national ranks and dominated Indonesia’s local Dota 2 tournaments.

In 2019 the team participated in two DPC events after they qualified for The Bucharest Minor and the OGA Dota PIT Minor 2019. BOOM Esports’ highest achievement in the competitive Dota 2 scene has been their fourth-place finish at the StarLadder ImbaTV Dota 2 Minor Season 3 this year.

In the organization’s announcement post, BOOM Esports’ CEO Gary Ongko Putera extended his gratitude to Dreamocel for being loyal to Indonesia and the team. “I really thank Randy for his dedication and always remember him as the best player in BOOM history.”

After the DPC season was halted by the COVID-19 global pandemic, BOOM Esports participated in many online tournaments and won the ESL SEA Championship 2020. They’ve consistently finished in second to fourth place, showing that they’re always in the running as one of the best Dota 2 teams in Southeast Asia.

But with the announcement of the DPC’s return in January 20201, BOOM Esports has decided to take a break from competition.