“Sometimes the shepherd must fend off the wolves.” 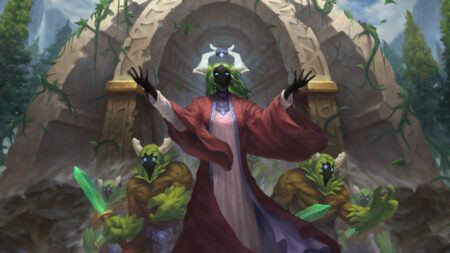 Welcome back to another hero prediction article! December 15 is just around the corner and we’re inching closer to not only the brand new 7.28 gameplay update but also the release of Dota’s 120th hero.

If you missed out on our previous article featuring the most baddass warrior lady in the Dota universe, Sorla Khan, do go back and take a look. I promise you won’t regret it.

In today’s hero prediction spotlight we’ll be taking a look at another hero from Artifact. Say hello to Prellex, priestess of the Radiant. That’s right Mirana, moons aren’t the only things that have priestesses around here!

Resembling a female creep in a robe, Prellex plays an enormous role in the war of the Ancients. Wielding powers gifted to her by the Radiant Ancient, Prellex’s sole duty is to raise and lead an army for the upcoming war against the Dire. If you haven’t figured it out by now, Prellex is essentially the commander of the Radiant creeps you see strolling down the lanes in your average game of Dota. Yeah, creeps actually have lore too!

It’s not mentioned anywhere how creeps are born but Prellex may have something to do with them. Considering her resemblance to Radiant creeps, she may be the one creating them in the first place. The alternative is that Prellex and the creeps are born from the Ancient since all three share the same Earthly theme.

Prellex constantly speaks of fighting for the Radiant as being a noble cause. It’s unknown as to whether Prellex actually thinks this or if perhaps the Radiant Ancient brainwashed her. Heck, she could even be the physical embodiment of the Radiant Ancient. It’s hard to say at this point since there’s so little information out there on Prellex but let’s just assume she is her own entity for now.

Anyone who’s played Artifact will know this by now but Prellex actually has a daughter named Kanna. The thing is they have a terrible family relationship.

Why you ask? Well… Kanna is in fact the priestess of the Dire. That’s right, the leader of the Dire forces is the daughter of the Radiant’s chosen one. We’ll go into more detail about Kanna next so stay tuned for her spotlight.

Looking at Prellex’s lore and art, she definitely looks and feel like an Intelligence hero. Artifact further supports this as Prellex is considered a blue card, all blue cards in Artifact consist of intelligence heroes.

I’m leaning more towards a support hero but lore wise, Prellex could possibly cast some pretty impressive offensive spells as well. In Artifact, there’s a card featuring Prellex who’s opening a portal alongside two other creeps. Much like Underlord, Io, and even Keeper of the Light who all have some sort of teleportation spell, we could be looking at a fourth to join the trio if she makes it into the roster mid December.

Earlier in the month, there were leaked voicelines from existing Dota heros that spoke of mind control. As a castable spell folks, not MinD_ContRoL the player. With how Prellex always convinces beasts and creatures alike to join the Radiant for the upcoming war, could she be the source of these voicelines? There is evidence that these voicelines belong to someone else but I’ll stay hopeful. Valve love to throw fans off the trail.

Whether she joins us or not this December, I’ll always keep an eye out for when Prellex finally joins us on the field of war. Especially with the possibility of her creating portals to cause absolute mayhem all across the map. For now, that’ll be it for the priestess of the Radiant.

In the next hero prediction spotlight, we’ll be taking a look at Kanna, priestess of the Dire, and daughter of Prellex.