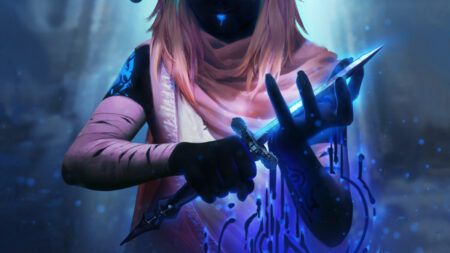 Welcome back to yet another hero prediction where we look at potential heroes who could be making their way to Dota 2 mid-December. We’re in the final stretch folks, just hang in there. Sven will be nerfed soon! Hopefully…

If this is your first time joining us on our hero prediction journey, Here’s what you’ve missed so far:

Again, we’re back in the realm of Artifact with possibly one of the most interesting looking characters that could be making her way to Dota very soon. I present to you the mysterious Kanna, daughter of Prellex and priestess of the Dire.

Yeah, that’s right. Kanna, born from the Radiant is the head honcho of the Dire forces. Things are a little messy between Kanna and Prellex so here’s what happened through Kanna’s eyes.

According to Kanna, she was born weak. In her mission to become stronger, she made some kind of contract with the Dire Ancient to raise an army in exchange for power. With this newfound power, her one wish is to see her mother and the Radiant dead. A little dark but hey, I won’t judge.

We don’t know how Kanna’s relationship with her mother soured, off the top of my head it does feel like her hatred is mainly targeted at the Radiant Ancient. A lot of her Artifact responses that involve the Radiant are very hostile. She could be pinning the blame on both the Radiant Ancient and Prellex for a miserable upbringing. Seeing how Prellex puts the will of the Ancient above all else, Kanna’s jealously likely continued to fester until she hit breaking point.

Of course, maybe things could have been different. Kanna may have still resented Prellex but viewed her path differently. Become stronger and return to the Radiant to seek Prellex’s approval. On her journey for power, she stumbled upon the Dire Ancient who promises great power in exchange for her allegiance.

Whilst with the Dire, Kanna could have unknowingly become corrupted. Effectively a puppet of the Dire. Remember, both Ancients are incredibly strong in this world. Of course, these are all predictions so feel free to come up with your own theories if you have any!

Whatever the reason for Kanna’s hatred of the Radiant Ancient, she’d make one hell of a hero. As a blue Artifact card, she’d likely also become an Intelligence hero if she’s ported to Dota. Though there could be a slim chance that she may also end up being an agility hero based on her slim and agile frame. A common theme amongst Dota’s assassins.

As far as potential skills go, Kanna has a card in Artifact that summons a Hound of War. These freaky looking canines are pretty interesting as they devour creeps in Artifact. Maybe Kanna players will need to feed their hounds creeps in a match of Dota, eventually they’ll become large enough that Kanna can ride it as illustrated in the artwork below.

Another possibility is that Kanna can steal powers from her creeps to boost her own. Her card Diabolic Conclusion does just this in Artifact. So instead of being a strong standalone hero, Kanna borrows the energies of her allies to boost her combat power making her a huge threat if her skill kit promotes the use of summons. If her hounds of war count as units she could steal from, Kanna may end up being one nasty hero to deal with. As they say, there’s strength in numbers!

I do hope Valve consider adding Kanna into Dota eventually if she doesn’t make the cut this time round. Kanna’s simple character design and fiery attitude is just what we need this holiday season. Her story, though very limited, is also way too interesting to pass up on expanding. I’m dying to hear her interactions with other heroes. I need to know more! Please, let it be Kanna this one time Valve. Just this once.