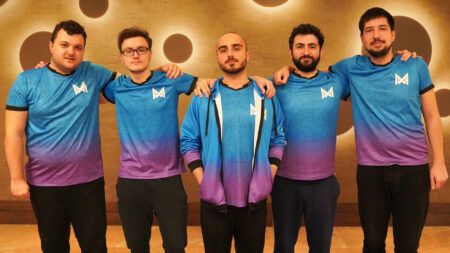 After a grueling group stage that lasted nearly four weeks, followed by a fourth place tiebreaker and an eight-team play-in tournament, Team Nigma made it into the Division 1 Playoffs. They did this by defeating Gambit Esports in a thrilling best-of-three elimination match.

With a spot in the EPIC League playoffs on the line, Nigma won the first game convincingly, utilizing all three core plays, Amer “Miracle-” Al-Barkawi, Aliwi “w33” Omar, and Ivan “MinD_ContRoL” Ivanov taking control of the late game and gaining a 1-0 lead over Gambit Esports.

In the following game, Nigma faced heavy adversity, with Gambit’s Arslan “xannii” Shadjanov becoming the strongest hero in the map with his Spectre, by having the most gold and experience in the game at the 36-minute mark.

After claiming Dire’s top lane set of Barracks, Gambit decided to extend their lead by claiming the Aegis of the Immortal. Nigma’s captain Kuro “KuroKy” Takhasomi tried to make a play by diving into the Pit, but Gambit was well-prepared for it and extended their gold lead to 17,000.

With the Dire buildings under constant siege, Nigma decided to send out Miracle- and w33 to cut the lanes of Radiant creeps to slow down Gambit’s pushes. This gave the two players an opening into the Radiant base, which forced Gambit to teleport back and defend their exposed Radiant Ancient.

With Gambit so eager to end the game, they failed to make sure all lanes were pushing towards the Dire base. This gave Miracle- and KuroKy another opening to go for the Radiant Ancient. Miracle- immediately rushed the Gambit’s Ancient, while KuroKy used his Skewer and Reverse Polarity that sidelined xannii’s Spectre. Gambit’s heroes managed to collapse on the two Nigma heroes, but w33 was able to join the fight and deal the remaining 193 damage needed to take down the Radiant Ancient as well as end the series.

Team Nigma’s come-from-behind victory was one of the most impressive wins we’ve seen in EPIC League to date.

Unfortunately, the former TI7 champions lost their lower bracket elimination match to Team Liquid and have now been eliminated from EPIC League.

Only six teams remain in EPIC League, with Team Secret going up against Virtus.pro and Vikin.gg facing Natus Vincere in the upper bracket. Meanwhile, Team Liquid and OG await the losers of the upper bracket teams for their lower bracket matches. All six teams are still in the running to earn the lion’s share of EPIC League’s US$500,000 prize pool.