The search for the ultimate video game waifu/husbando 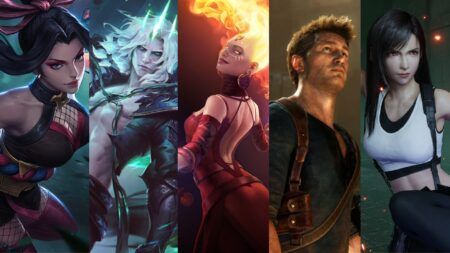 In the search for true love, don’t we all sometimes think it would be easier if we could just marry one of our favorite video game characters?

Yes, these fictional guys and girls have totally captured our hearts, and even after we have shut down our PCs and turned off our consoles, they just keep haunting our minds like a catchy love song.

But out of all the potential waifus and husbandos out there, who’s the best?

For me, there’s only one man “worthy” enough to be my husbando:

I absolutely adore him in the video game series Ace Attorney. He might be a bit of a tsundere, but Edgeworth is the kind of guy known to be loyal and would stick to you till the end.

What’s more, he dresses so well! A Victorian jabot in the 2020s? Only my Edgey-poo could pull that off, no objections here. He also reminds me of someone close to my heart in real life.

But I realize not everyone may share the same opinion as me. So what about the rest of the ONE Esports staff? I asked around, and here’s who they picked.

Characteristics:  “Um…Do all men only like cute girls?”  Yes they do Hanabi. Yes they do.

Hanabi may seem like a shut-out and a really cold character, surrounding herself with an impermeable flower shield but underneath that tough exterior lies a soft and lovable sweetheart. She has said many times that she can’t resist cute stuff, well I can’t resist cute stuff too, Hanabi. She is a beast is in the late game and when she puts on her V.E.N.O.M skin, men from far and wide line up just to feel the bounce of her petal barrage.

She is the blade in my hand that pierces into the depths of my heart.

What makes her the perfect waifu: Hanabi is not only drop-dead gorgeous but she is a very skilled ninja. She has enough intrigue and mystery surrounding her past to make her that much more enigmatic. But her voice lines reveal her warm yet shy personality which makes her an absolute sweetheart.

She is definitely the first pick of my heart.

What makes him the perfect husbando: He not only has an item in League of Legends named after him, he also has his own spinoff game – Ruined King. Who wouldn’t want to be a queen next to a king with such a big sword? If there’s one partner I’d choose in Runeterra, it’d better be the most powerful person on the planet.

Sure he abandoned his nation, and maybe he’s a little too obsessed with a lost cause, and yes, he’s dead and all, but at least he’s immortally hot. Even as a wraith with a gaping hole in his chest, Viego is sexy. Plus, he’d do anything for his wife, so as much as his reign is terror, his love is also eternal.

What makes her the perfect waifu: Lyralei can protect you without taking physical damage for a couple of seconds. You will also not get bored when you’re with her because she talks nonstop.

What makes him the perfect husbando: Though Arthur grew up with a gang, the man still has a heart. He isn’t simply a cold-blooded killer as most people assume, he tries his best to do what’s right regardless of his upbringing.

His loyalty to the gang is unmatched, so much so that he’d willingly die for them if he could. If you need help, he’ll be the first one to come running.

Characteristics: Yuna is pretty, charming, kind, adventurous, and definitely the smartest girl in Final Fantasy X. She also has great friends who are fun to hang out with.

What makes her the perfect waifu: She can sing you to sleep. Although, most of her songs are pretty sad so most likely you’ll cry yourself to sleep instead. She’s also a strong, independent woman who can look after herself during danger. Nobody would want to mess with someone that can summon Aeons.

She also knows how to dress up for different occasions and can switch back to her more conservative outfit from Final Fantasy X when meeting your parents so they’ll think she’s just a nice young lady. But the moment she gets out of the house, she can change into one of her more modern outfits, then it’s clubbing time!

Characteristics: Smart (she’s a Doctor!), sweet, kind, loyal, protective, cares about the environment, loves bubble tea, and can make ice cream for you. Mei is bae.

What makes her the perfect waifu: Sure, D.Va and Mercy are the obvious choices for Overwatch waifus, but Mei is the real catch. She’s sweet and cuddly and you just know she would enjoy a movie night on the couch with some cup ramen, a bubble tea, and homemade ice cream for dessert. Plus, if anyone messes with you, she will ruthlessly hunt them down, freeze them, and put an icicle in their head.

Characteristics: Ruthless, royalty (self-proclaimed, but I’ll take it), has an entire galaxy-spanning swarm of alien monster bugs at her beck and call.

What makes her the perfect waifu: As a terran, Sarah Kerrigan was a highly skilled tactician, as well as a woman of principle — a strong and independent woman in every sense of the word. On the other hand, she was also quite aloof and withdrawn — but at least these are things we certainly have in common. We can work that out.

But then the infestation happened and Kerrigan found a new lease on life as the Zerg’s Queen of Blades. Never mind that she turned into an amoral mutant hybrid with an insatiable appetite for blood…

You know what? I can’t justify how she’s the “perfect” waifu. She might even chop my head off with her awesome wing blades just by thinking about it. Still, the Queen of Blades is simply one of gaming’s most badass characters. As long as I stay on her good side (read: alive), I can’t say no to that.

Characteristics: Passionate, smart, and encouraging! She’s always trying to get the best from her friends and family: not to mention keeping them well fed.

What makes her the perfect waifu: Mama is objectively, philosophically, unequivocally, the ultimate waifu. As a partner she wants to bring out the best in you, be a better person, a better friend; to always be striving for perfection.

She loves spending time with you, but she’s not clingy or dependent. Left to her own devices you can find her enjoying the garden, doing crafts, or going camping! (You can bet she would also be making bank from her YouTube channel IRL). Plus, her sandwiches have rainbows in them…

Characteristics: Strong-willed, motherly, and the voice of reason.

What makes her the perfect waifu: Aside from having flowing black hair and dark red eyes, Tifa is a shy-hearted badass who stands up for what she believes in.

She’s a woman of action, acting as both the manager of the bar Seventh Heaven and an active member of the resistance group Avalanche that fights against eco-terrorism. Being an introvert myself, we can definitely sit in a corner together and not discuss our mutual feelings about each other. She can also throw hands so that’s a plus. You could say, Tifa can lock my heart up any day.

Characteristics: Sweet, beautiful, and kind even though she gets kidnapped all the time.

What makes her the perfect waifu: What’s not to love about Princess Peach? She’s the original video game princess that we all know and adore! No wonder Mario and Bowser are always fighting for her affection, she’s the ultimate waifu material.

What makes him the perfect husbando: Despite being abused his whole life, Ghost never let that faze him. In the end, he still turned out to be a strong man with great spirit. He never turned his back on his family, he took care of his abused mom, cleaned up his drug-addicted brother, and was an amazing soldier overall. Also since he’s wearing a mask all the time, you can make him out to be as handsome as you want him to be.

Characteristics: Funny, witty, easy to talk to and hang out with, smart and well-read, clearly loves the outdoors

What makes him the perfect husbando: Nathan Drake is always the first to crack a joke even in stressful and dangerous situations. He’s a team player, very intelligent, and self-aware.

All the Uncharted games show that he’s definitely fun to be on an adventure with, so how about the adventure called life? ❤ (Plus, I’m a sucker for those adventurous Han Solo types.)

Characteristics: Smart (just look at that 24 base intelligence stat!), can burst damage opponents, and I don’t really like being cold so fire is great.

What makes her the perfect waifu: She’s dynamic. She can either support me, or she can take the lead while I support her. That’s teamwork. She’s also sassy, which means she likes interacting with other people. I am also an introvert, so she’ll save me the trouble of being the social one.

READ MORE: Taric somehow got even hotter in his Legends of Runeterra debut