Bilgewater will open its port later in 2021. 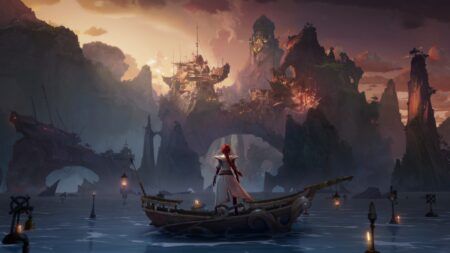 Riot Games’ partner-focused publisher, Riot Forge, recently announced that Ruined King: A League of Legends Story has been delayed to a later time in 2021.

Riot Forge last showcased the “Early 2021” single-player RPG at the 2020 League of Legends World Championship around October, but with evident challenges that hinder both workplaces of Riot Forge and partner developer Airship Syndicate, they’ve decided to label it as a game that is “Coming 2021”.

“Our core values as Riot Forge are pretty simple,” said the publisher. “We want to partner with indie developers that tell kick-ass stories and we want to be transparent with our community.”

While it may be a single-player RPG, Ruined King borrows a lot from League’s world of Runeterra. You’ll be handling your own charismatic crew of popular champions like Miss Fortune, Yasuo, and Ahri and venture into the Black Mist to fight the infamous Ruined King.

With the game being a joint project with Airship Syndicate taking over the reins of development, Riot Forge is more than willing to give the indie developer more time to flesh out the game.

“We’re excited for you to experience the fantastic adventure Airship Syndicate has created with Ruined King and we want to ensure we support their vision and give you an awesome game,” said Riot Forge.

Ruined King: A League of Legends story will be out sometime in 2021.