Taric somehow got even hotter in his Legends of Runeterra debut

League of Legends’ support champion Taric has been added to Legends of Runeterra as part of the new Targon region. Although this is very much run-of-the-mill for Riot Games and their usual game updates, I can’t seem to take my eyes off of Taric and his fabulous presence on a card.

I might sound a bit crazy, but I really think Taric just keeps getting hotter.

Hear me out, I’ve been playing League since 2010 and I always revolved around support champs because you are void of any carrying duties. Among the various support champs in the game, Taric was one of the first champs I stuck with throughout the years.

I basically saw him as the perfect support. Previously known as the Gem Knight, Taric was a definitive healer and had a plethora of damage output for a support. By the late game, you could easily get heavy AP items and Imbue and Shatter your way through a solo-kill.

Unfortunately, there was one problem with Taric: his looks.

Taric’s original design was lacking on all fronts. Sure, you have a Fabio-inspired hunk in dazzling armor, but his concept as a Gem Knight didn’t really shine through in his character model.

He looked like a gaudy, spikey nuisance that smashed his hammer incessantly in the bot lane. His original Armor of the Fifth Age skin also looked half-baked, giving Taric an overtly pink guise with fuzzy leg-warmers.

“He looked so absurd before,” stated Greg Street, head of creative development at Riot Games when talking about the character in an explanation video. Riot Games design director Andrei van Roon also agreed, saying that he was one of those most showing of age.

Fortunately, Taric got a well-deserved rework in April 2016, morphing the Gem Knight into the Shield of Valoran. This is where the hotness begins. 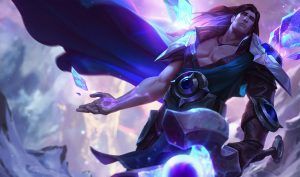 Looking less like a design fail and more like a crystallized ode to Fabio, Riot ditched the chunky armor for a more fashionable deep-V tunic, showing off his redefined pecs. His Armor of the Fifth Age skin was also saved with an even deeper V to show off his six-pack.

As for Taric’s game presence, the developers had a more holistic approach to him being a support. They removed most of the AP damage that he had and replaced it with stronger support skills like Bastion (shield and bonus armor) and Cosmic Radiance (AoE invulnerability).

“I like what the team did with the update to him,” said Van Roon. “They actually gave him a bunch of depth and compassion in his backstory and made him a much stronger character with much better art.” His diehard support presence continues on in Legends of Runeterra, where Targon’s entire set is dedicated around tanking up your followers and champions. On top of that, Riot has made even hotter splash art of him and his gems.

Whether you call me obsessed or grateful after this entire Taric anecdote, I’m just glad that my most played character received one of the best updates in the game and can bask in the glow of being the hottest male champion in the League universe.

READ MORE: Targon is about to change the entire Legends of Runeterra meta