All new Operator skins coming to Warzone 2.0 and Modern Warfare 2 in Season 1

Season 1 of Warzone 2.0 and Modern Warfare 2 will give several of your favorite Operators a makeover.

A slew of new Operator skins, both in the battle pass and via purchasable bundles, will let you step onto the battlefield with a brand new look.

With over two dozen unlockable Operators in the game, split between Specgru and Kortac teams, and an even wider selection of skins, you now have more choice than ever.

Here’s a look at all the new Operator skins coming to the game in Season 1. Those who purchase the battle pass stand to earn the following skins:

The Victory Sector is unlocked by completing Sectors A1 to A20.

All the Operator skins coming to the Store 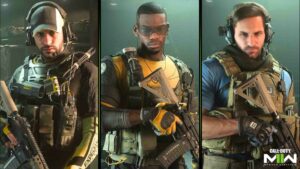 They cost anywhere from 1,200 to 2,400 Call of Duty Points, and each bundle also includes additional items such as weapon blueprints and cosmetics like calling cards and emblems.

The CDL Launch Pack is also available to buy for US$9.99 and comes with four CDL Operator skins, a CDL weapon camo, charm, sticker, and other cosmetics.

The Lionel Messi, Paul Pogba, and Neymar Jr. skins will arrive from November 21 to 29 as part of the Modern Warfare FC event. During this event, you can purchase bundles to acquire the limited-time Operators.

The remaining operator skins are likely to be released as part of new bundles throughout Season 1 or later.

Learn more about the new DMZ mode, the best red dot optics to use, and the best muzzle attachments.