Precision is key with these weapons. 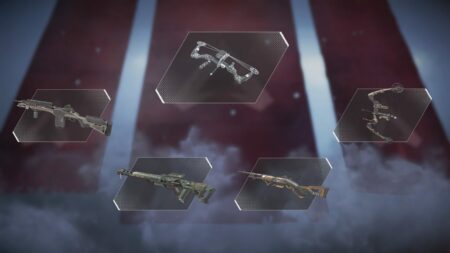 The category will coincide with the game’s newest weapon, the Bocek Bow.

The developers stated that Marksman weapons will not only create a new combat style, but also further define other weapon categories such as assault and sniper rifles.

“Weapons in this category are precision weapons that are effective up to medium-long range, and are the sort of in-betweens of assault rifles and snipers,” said EA and Respawn.

The Marksman category will feature four weapons in total:

While the G7 and 30-30 are currently in the AR category, their firing styles do not really sync up with more bullet-heavy ARs like the R-301 and the Flatline.

The Triple Take also feels like a faster, out-of-place alternative with a 72 RPM compared to other snipers like the Sentinel (37.5RPM).

To give the category a more definitive feel, the developers are increasing Marksman weapons’ ADS movement speed, which will hover between sniper and AR speeds. You can also expect a normalized hipfire spread.

Apex Legends’ newest season, Legacy, will start on May 4.