What’s up with the bowl cut? The Mob Psycho 100 anime returns with a brand new season this August, but fans of the series might not remember what’s going on with Shigeo “Mob” Kageyama.

From Body Improvement club to enemies-turned-friends, the story of Mob Psycho 100 gets pretty complex in just two seasons. While the esper’s awkward charm is unforgettable, it might be hard to recall character names and key events from the anime’s past seasons.

If you’d like to jog your memory, here’s a detailed recap of seasons 1 and 2 of the Mob Psycho 100 anime.

Warning: Major spoilers for seasons 1 and 2 of the Mob Psycho 100 anime.

Season 1 introduces Mob as a part-timer at the Spirits and Such Consultation office, an agency led by self-proclaimed exorcist Arataka Reigen. Reigen acts as the sweet talker of the business, and Mob steps in when they need to do actual exorcisms.

But Mob’s psychic powers often become a burden when he tries to fit in at Salt Middle School. The esper runs into foes who eventually turn into friends, such as Ekubo/Dimple from the LOL cult and Teruki Hanazawa, a rival esper from Black Vinegar Middle School. Mob’s first usage of 100% was when he exorcised Ekubo and brought him back to his original spirit form.

Mob’s younger brother Ritsu is secretly envious of Mob’s abilities, even though Mob believes that Ritsu is the more talented sibling. Ritsu soon develops his own psychic abilities and tries to cut ties with Mob, but things turn awry when he’s kidnapped by Claw, an evil esper organization that brainwashes new espers and uses them as recruits. 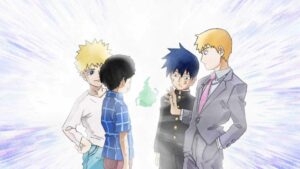 Hearing the news, Mob and Teru raid Claw’s 7th Division hideout to break his brother and other novice espers out, but also end up getting captured. The esper crew is eventually saved by Reigen, who tricks the guards into believing that he’s the boss of the Claw.

The Scars — the top members of Claw — catch Reigen on his bluff and start an all-out fight. While Ritsu and Teru are relying on Mob to take them all out, Reigen squeezes Mob’s face and says that it’s okay to back down. Mob then remembers his first consultation with Reigen and how he reassured him that he can control his powers.

From the brief contact, Mob actually transferred his powers to Reigen, turning the ordinary human into an overpowered psychic who can keep up with the Scars. Leader Ishiguro unleashes a final gravity ball to destroy the hideout, but is immediately stopped by a young kid named Sho.

Sho is actually the one behind the Claw hideout and their experiments, but is disappointed that they didn’t find any useful espers. Once Sho demolishes the 7th Division, the rest of the Scars back down because they’re too weak to go up against Mob’s crew. Mob and his friends return to their normal lives.

In Mob Psycho 100 season 2, Mob goes through a journey of self-discovery when he goes head-to-head with the city’s best espers.

After a few big-time exorcisms and a quarrel with Reigen, Mob sets out to impress his crush Tsubomi by finishing in the top 10 of a marathon. His plan backfires as he finishes in 74th place and goes home disappointed, only to find his home on fire.

Now at ???%, the esper enters the house and finds three burnt bodies. Ekubo helps him come back to his senses by saying that it’s all fake. After beating up nearby Claw recruits out of spite, he’s picked up by former Scar members to meet the rest of the 7th Division psychics from season 1.

The familiar espers explain that Claw, led by Toichiro Suzuki, will attack the city and any espers that will get in the way. Reigen also reassures that his family is probably safe, prompting Mob to pass out due to exhaustion.

The hallucination was actually caused by Sho, who wanted Mob to foster some hate for Claw. Despite Sho’s manipulative ways, he is working alongside Ritsu to stop his dad, Toichiro.

Claw’s plans go into full effect and Mob’s friends do their best to delay the mayhem until the middle schooler wakes up. Once Mob regains full consciousness, he ascends the Claw tower and is confronted by Katsuya Serizawa. The two trade blows until Mob pacifies the Claw member by making him realize that he’s being used by Toichiro.

Toichiro arrives at the scene and starts a psychic duel with 100% Mob. Mob soon accepts defeat when the leader’s powers spiral out of control.

As Toichiro self-destructs, Mob shows him kindness by staying with him and containing the explosion in his body. Mob manages to survive the blast and is escorted to shelter by Sho.

The next day, bystanders discover a massive piece of broccoli — nicknamed the Divine Tree — sprouting out of the rubble. The giant vegetable came from Mob, who had broccoli seeds in his pocket.

Taking Mob’s actions to heart, Toichiro accepts his wrongdoing and is taken into custody by Joseph, an esper hired by the government. Before leaving, Toichiro apologizes to Sho for the way he treated his mother. Sho replies that she still thinks about him.

Mob and Reigen move into a new office space and welcomes Serizawa as the third employee of Spirits and Such Consultation.

Streaming platform Crunchyroll will host the premiere of the first two episodes of Mob Psycho 100 season 3 at Crunchyroll Expo on August 5-7. The rest of the season will start airing in October.