Everything we know about Wild Rift’s Ranking system so far 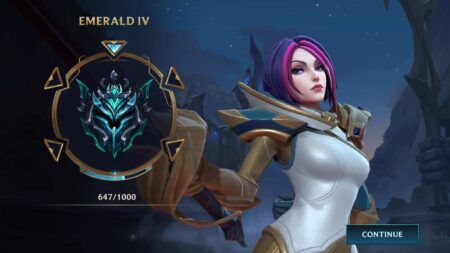 League of Legends: Wild Rift is finally back after a short hiatus. Since everything has been reset, now is a good time to grind again and level up to eventually play in Ranked mode.

Here’s what we know so far about Wild Rift’s ranking system.

How to unlock Wild Rift Ranked

For starters, Wild Rift players can unlock Ranked PVP once they reach level 10. For comparison, the requirement for League of Legends is to reach level 30 and unlock at least 20 champions.

There are ten total ranks in Wild Rift, listed in ascending order:

PC players would already be familiar with these tiers, except for the Emerald tier.

“We’ve added Emerald, a new tier between Platinum and Diamond, so we can distribute players more accurately at this skill level,” explained by Senior Game Designer Ed “MartianSpider” Knapp.

Similar to LoL, each tier from Iron to Master has four divisions with four being the lowest and one being the highest division. (e.g.: Silver IV is the lowest in the tier)

Wild Rift has implemented two different systems for Iron to Emerald players and for Diamond to Challenger players.

All players ranked Emerald and below will earn Ranked Marks when they win a game, and will immediately lose one after a defeat. Iron to Bronze players are immune to this Mark loss but Silver to Emerald players lose one Mark for every defeat.

Ranked Marks DO NOT decay if players become inactive.

Since the grind for Emerald players and below can be a real challenge, Wild Rift is introducing the Ranked Fortitude system which is the bar located just below the player’s current badge. Fortitude points are earned regardless of victories or defeats, but through “a variety of sources including skilled plays” according to MartianSpider.

Fortitude points can be earned by maintaining winning streaks, showing skilled plays, and continuing with a game despite an AFK player. Simply put, “The better and more honorably you play, the faster you’ll fill the Fortitude bar,” according to Riot Games. A full and even a half Fortitude bar will automatically be used after losing a Ranked match to avoid dropping Ranked Marks.

Meanwhile, Diamond players and above adopt a system closer to League of Legends PC, where they earn Victory Points (VP) similar to League Points (LP). The number of Victory Points a player earns or loses is “determined by a lot of factors” including skill levels shown during matches.

Getting into a Promotion series

Of course players have the option to make a big jump from one tier to another by getting into a Promotion series. It’s similar to League of Legends where players have three games to play to determine if they get promoted to another division or retain their current one.

Winning a Wild Rift Promotion series will bump the player to the next tier with some additional benefits like a bonus 1 Ranked Mark and a brief immunity from demotion while a Promotion failure will deduct 2 Ranked Marks from the player.

It is to be noted that Fortitude points are not applicable during a Promotional series.

Once you reach level 10 and unlock the Ranked mode, this screen will appear on your Ranked page:

It will show your expected tier based on your performance as you progress on your placements. Like in the PC version, you need to play ten placement matches to determine your initial Wild Rift rank.

Note that provisional matches award two marks for a victory, and losses are not punished during the player’s placement games.

Wild Rift will allow players to queue solo, duo, trio, and of course on full teams of five. However, unlike the PC version, which has solo /duo and flex options, Wild Rift will only have single queuing which means as a solo player you might get teamed up with other solo players or a mix of two duo players.

Along with this queue system comes single progression, where Wild Rift players will only have one rank regardless of team sizes.

Players can queue for solo, duo, trio, and five full-team composition in their ranked games.

When playing with friends from different divisions, Riot Games allows queuing with players that are within one Ranked tier. Silver players can play with Bronze and Gold players, however, inviting and mixing a Bronze player with someone from Gold is not possible since they are more than one tier away from each other.

With all that being said, are you ready to play your first Wild Rift Ranked game?

READ MORE: How to register for the Wild Rift beta