This kitty’s got claws. In the support role as Yuumi, BRU Whatthejes proved that the Magical Cat can dish out tons of damage during their second game against Cerberus Esports, if you play her right.

BRU Whatthejes pounces on Cerberus Esports at the WCS Finals 2022

Whatthejes was a star initiator for Buriram United, utilizing Yuumi’s Final Chapter ultimate as their go-to initiating play. At the five-minute mark, the Yuumi player attached himself to Metis “NoeL” Wongchoosee’s Garen and immediately popped Yuumi’s ultimate to spearhead a mid lane engage.

Though Coldenfeet eventually met his demise at the hands of the remaining CES players, the entire Buriram squad was close behind as the cleanup crew, grabbing two more kills and handing four well-deserved assists to Whatthejes.

Later in the game, Coldenfeet and Whatthejes formed an exceedingly dangerous duo against lone opponents in the jungle. Once the support player scouted out a target with Yuumi’s Prowling Projectile, Coldenfeet closed the distance with the leap from Thrill of the Hunt.

To drive home their advantage, Whatthejes then piled on the pressure with Final Chapter’s crowd control and damage. 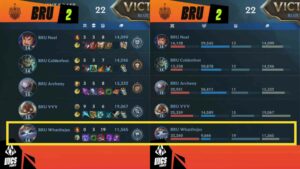 With BRU winning Game Two, Whatthejes claimed the Player of the Game Award with standout statistics. The Yuumi specialist racked up 19 assists and dealt a whopping 32,260 total damage, proving that even support champions can hard carry.

Buriram United went on to sweep Cerberus Esports 3-0 and advance to the lower bracket semifinals, where they will face Filipino representatives Rex Regum Qeon (RRQ) on May 6.