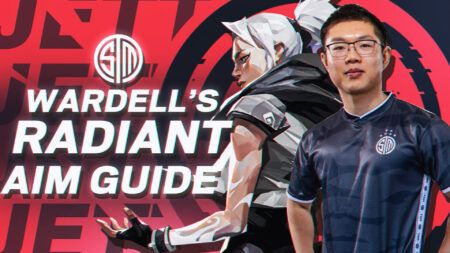 TSM star Valorant player, Matthew “Wardell” Yu has released a simple and easy beginner’s guide for players who want to learn how to use the Operator.

Wardell broke down the five basic skills every player needs if they want to start shooting like a Radiant God.

Wardell explained that you can hit easy shots, as long as you don’t try to aim too fast that you end up missing your target. At the same time, alternatively, don’t aim too slow and allow your opponents to take their time getting a headshot.

Players must also be able figure out if an opponent is going for a jiggle peek or a wide swing. A jiggle peek is when an enemy player briefly shows themselves out of the corner, without completely running out, prompting you to miss your shot. A wide swing, on the other hand, is when a player runs out of cover completely and doesn’t stop near cover.

For players who are new to using the Operator, Wardell advises that, instead of tracking targets with their crosshair, players can wait for targets to come across their scope instead. Players may wait for them to hit the red dot, and just react at the perfect time.

And when missing a shot, you should be mindful about remaining in the open. Hide behind cover after each shot and peek meticulously, gradually moving your crosshair little by little, so you’re not caught off guard when opponents decide to move out.

Make sure to find the right mouse sensitivity for you. And, once you figure out the right sens, it’s all about muscle memory. “So, if [your sensitivity] is too low, you’ll be too slow to flick [to your target], and if it’s too fast you’re going to over-flick,” said Wardell.

Players should practice their flicks before going into a game. Get warmed up in the range and try out your flick shots, using different angles.

If you win the pistol round, you could also buy a Marshall, light shields, and some abilities in the second round. Players are advised to save as much as they can, so that they can have enough for an Op in the third round. And if you lose the first round, just go for a hard save and stick with a Classic.

Also, don’t buy a Sheriff or a Bucky and try to bank up to 5,500 to 6,000 credits, and save up for the next round. Players should have heavy shields and full utility when buying an Operator.

Wardell recommends holding — what he calls — “smart angles,” which are spots on the map that are non-preferable and allow players to fall back if they need to. The preferable locations he’s talking about are the most common peeking angles most players take.

Wardell also gave a bonus tip on how to go up against Operators. Players can jiggle peek or jump jiggle, and bait out an Operator shot to find out where the enemy sniper is on the map. Make sure to use your abilities like smokes and flashes to guarantee that they don’t get an easy shot on you.

Wardell will be releasing more Operator tips in the future. In his next video, the famed TSM star player will be going over more advanced tips and mechanics with the Operator.