Hiko on Viper nerfs: ‘She can’t be your only controller agent anymore’

It’s been a rough ride for Viper mains. 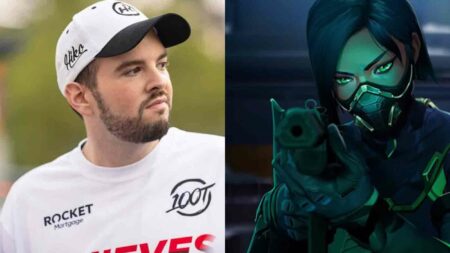 100 Thieves‘ new Viper main may soon find himself having to change the way he plays the American chemist. Spencer “Hiko” Martin thinks she will no longer be able to fulfill her role as a standalone controller, or smoke agent, after the Viper nerfs in Valorant patch 4.04.

Viper now needs to be played with another controller agent, even on maps like Breeze, according to the 31-year-old pro as he reviewed the changes on stream.

What are the changes to Viper in Valorant patch 4.04?

After the previous buffs to Viper, and the addition of new maps Fracture and Breeze, Viper became a best-in-class sentinel and controller, effectively fulfilling the roles of two agents. As the only controller who could cut off multiple lines of sight with just her Toxic Screen, she was also a top pick on Icebox before its rework.

But after the new Viper nerfs, Hiko believes that she isn’t able to serve those dual roles anymore. The higher fuel drain when both Toxic Screen and Poison Cloud are active forces her to choose between the two, so she can no longer block off multiple lines of sight as effectively.

Teams will likely need to supplement their Viper with another controller or sentinel, potentially shaking up popular agent compositions on many maps.

Double controller compositions may become more common in the new meta. Some teams already do this on maps like Bind, running both Viper and Astra, and Hiko believes that other controllers could eventually be paired with Viper as well.

“I think we’ll see Omen and Brimstone on Breeze,” said Hiko. “I don’t think you can get away with just having a solo Viper as your controller player anymore.” Omen and Brimstone were recently buffed in Valorant patch 4.04, so there’s good reason to expect they’ll find their way back into the pro meta.

Viper’s Snake Bite is still a viable post-plant molly that can secure the round by getting defenders off the spike. The slightly reduced duration on Snake Bite gives defenders a bit more time to defuse the spike, but it still does enough damage to kill opponents who decide to stay on it. As always, Viper mains just need to make sure to pair Snake Bite with Poison Cloud.

Even then, the overall hit to Viper’s utility is so significant that Hiko has doubts about her position in the meta.

“I don’t even know if Viper is going to be that good on Breeze,” he said. “Even on a map like Split, to not be able to wall and bubble at the same time changes timings a lot.”

Viper wasn’t the only controller to receive the short end of the stick in Valorant patch 4.04. Astra, another favorite in the pro meta, was heavily nerfed as well.

You can read the full notes for Valorant patch 4.04 here.