This team is unstoppable. 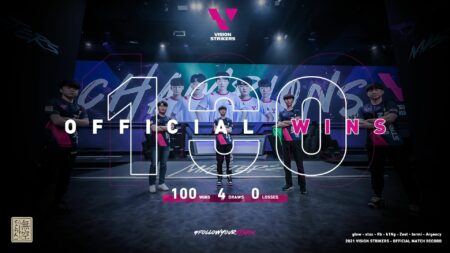 With their 2-0 win against fellow Korean team Feel So Good in Stage 2 of the Valorant Challengers, Vision Strikers mark their 100th win in competitive Valorant.

Vision Strikers were dominant in the best of three series against Feel So Good, only losing a total of six rounds in the two maps played. The win streak has put the team second on vlr.gg’s world rankings, only a few points below the current number one team, Sentinels.

They’ve even beat Japan’s Absolute Jupiter during the A. W. Extreme Masters Asia Invitational, alongside other teams from Taiwan, Hong Kong, Singapore, Thailand.

Vision Strikers have continued to impress, with many fans considering them a wild card for Worlds later into the year.

It seems as though no one in Korea is able to contest Vision Strikers, making their Masters slot in Reykjavik as good as a done deal. As to how their prowess will fare against the titans of Europe and the kings of North America? We’ll have to wait and see.

READ MORE: Viper is about to be meta (for real this time)