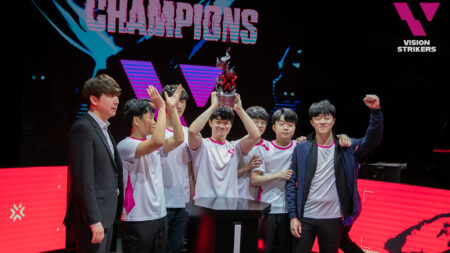 Vision Strikers is undeniably the best team in Korea. Moreover, they are on a path to prove they’re the best Valorant team in the world.

Duelist main Goo “Rb” Sang-Min (구상민) also landed the best highlight of the weekend, when he caught three TNL players with his Showstopper ultimate that would have made T1’s Valorant streamer Connor “Flights” Dykes proud.

But what is even more impressive is that Vision Strikers have been able to maintain their undefeated 54-0 professional match win record. Even though the team has two 1-1 draws against ZFGaming and  NUTURN Gaming, Vision Strikers has yet to lose a best-of-three or best-of-five match.

This unbelievable win streak began on June 6, 2020, when they defeated UNFISS in the WESL x Toonation tournament. Vision Strikers effectively won every tournament they entered in 2020, including the First Strike Korea tournament where they swept TNL Esports 3-0.

Vision Strikers’ squad has also remained together ever since, and now have their sights set on earning enough Valorant Champions Tour circuit points for the Global Championship at the end of the year.

Vision Strikers’ group stage wins in the Valorant Masters Korea competition have advanced them to the tournament’s semifinal, where they await the winner of the decider match. Vision Strikers is set to play on March 17 (Wednesday) at 4:00 p.m. GMT+8. Interested viewers can catch them through Riot’s Twitch or Afreeca TV channel.