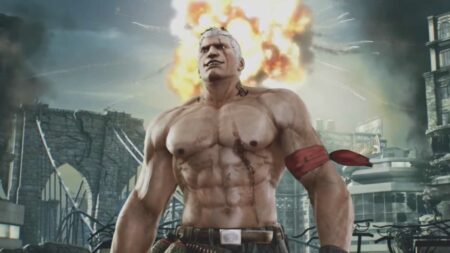 Tekken is regarded as one of the best fighting game franchises out there, revolutionizing the fighting game community (FGC) scene with its heavy-hitting combat and unique 3D system.

While the franchise has become a favorite for arcade goers and casual button mashers, many newcomers to Tekken esports may not fully understand the caster lingo behind its intense brawls.

Sure, you can tell Jin and Martial Law apart, but what exactly is a Rage Art and why is it so important?

To get you started, here are five terms that you’ll hear during any competitive Tekken tournament.

The Hellsweep is a game term for any move that acts as a sweeping low-hit that is very tricky to read.

The term is usually related to the signature playstyle of Mishima characters like Kazuya and Devil Jin and their unique move, the Spinning Demon.

While the Hellsweep is synonymous with the Mishimas, many characters also have similar moves that mimic its style and combat properties. One example is Leroy Smith’s Twin Dragon Acceptance which has also been nicknamed the “pimp sweep”.

The Electric Wind God Fist (EWGF) is a Mishima-exclusive move that is akin to the Hadouken of the Street Fighter series. While it may not be as flashy as the signature fireball, the EWGF is lauded as a hard-to-execute move that only a few players can do on the fly.

To break it down, Mishima characters have a movement mechanic called a wave-dash (forward, rest, down, down-forward) that opens their move list to classic moves like the aforementioned Hellsweep and the EWGF.

The EWGF is actually a just-frame (within the time interval of 1-4 frames) variant of the Wind God Fist. Though the two have the same start-up frames (11), the Wind God Fist and EWGF vary significantly on block. The slower WGF is -10 frames on block (punishable) while the just-frame EWGF is +5 on block with a bigger pushback.

If you’re having trouble distinguishing between the two, the EWGF will always have an electric animation and lightning sound cue so keep an eye and ear out for that.

Tekken has been known to be the bare-knuckle fighting game that strays away from the use of projectiles and meter bars, but the game went through a fundamental change in Tekken 6.

Aside from the vastly improved graphics and the arrival of new characters, the game introduced a new Rage system. Characters can now enter Rage mode once their health bar goes below 25%, causing them to emit a red aura and deal more damage.

Improving on the mechanic in Tekken 7, the developers added two new options for accessible comeback damage: Rage Art and Rage Drive. Rage Art is an uninterruptible move that incites a time-stopping cinematic combo, while Rage Drive is a more fluid special move that launches the opponent during combat.

The new Rage moves initially angered fans since they gave inexperienced players an easy comeback, but the pro scene soon saw the rise of amazing and clutch Rage plays.

One iconic moment for the Rage system was at the 2017 Tekken World Tour Finals, in which Son “Qudans” Byeong-mun won a round against Choi “Saint” Jin-woo with a last-second Rage Art.

While it does sound like something from the Super Smash Bros. scene, Double Luigi is actually a quirky mondegreen stemming from the earlier moments of the Tekken community.

The phrase is commonly used in English-speaking communities for the final, equal-score round of a set, but it actually comes from a Japanese Tekken 5 tournament final in 2006.

When the two players reached the 2-2 scoreline in the final game, the commentator is heard saying “dabaru richi”, an old-school Japanese FGC term which roughly translates to final or winning round.

With no one to inform English audiences who watched the clip back in 2006, the misheard phrase has been passed down and immortalized as Double Luigi.

The No Round Brown is a term used to explain when a player is able to win a game without conceding a single round (3-0), hence the “no round”.

The origins of No Round Brown lie in North America’s Tekken Tag Tournament 2 days. A local favorite by the name of Ricky “Pokchop” Walker popularized the No Round Brown by calling it before a game started, especially during his heated exhibitions with RealLaw.

While he may just be a charismatic player who likes to entertain his audience, many NA pros have correlated the term’s now-popular use with Pokchop’s larger-than-life antics.

Since most of the terms we’ve mentioned have a communal origin, it’d be right to add a new word to the Tekken dictionary.

During the Tekken Online Challenge in 2020, the Australian Tekken community coined a term for a double no-round brown: a Dudu Brown.

After Aussie player DeeonGrey did the deed during the event’s grand final, casters Petro and Brownman stumbled into the term during a post-game discussion.

READ MORE: We discovered a secret technique to break King’s chain-throw in Tekken 7