Break free from the jaguar’s clutches. 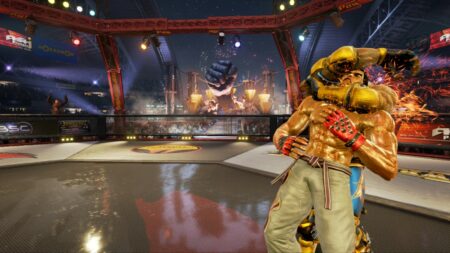 If you’ve been playing Tekken for a while, chances are you’ve fallen victim to one of the many chain-throws of the masked wrestler, King. It makes you feel helpless when done correctly, because of the massive damage it inflicts.

In a viral Tekken 7 video of the Korean streamer Mr. Ingjo, a King opponent used a chain-throw on him. He tried to escape by frantically mashing buttons paired with screams of panic and frustration. But in the end, there was nothing he could do but thump his fightstick with his fist,

Multi-throws have been around since Tekken 2. And with the ever-changing meta, this tactic still resurfaces every once in a while. In this guide, we’ll provide you with tips on how to escape the clutches of the Leopard-masked luchador.

To make it easier to learn how to escape throws, it is important that we first understand its concept.

A throw, or grab, is a mechanic in Tekken that is used to inflict damage on your opponent, it is sometimes used to gain position or frame advantage.

It is unblockable, but it can be dodged or escaped. Throw escape commands are usually 1 (left punch), 2 (right punch), or 1+2 (simultaneous), depending on what kind of throw is done.

Chain-throws or multi-throws, on the other hand, is a technique used by King and a few other characters wherein throws are connected in a sequence to induce more damage on the enemy.

What is the Mexican Magma Drive 2?

In the clip of Mr. Ingjo, his opponent used a version of the Mexican Magma Drive 2. This is King’s longest and most damaging multi-throw sequence apart from the Rolling Death Cradle (RDC).

Here’s the breakdown of the Mexican Magma Drive 2 version used in the video.

You will notice that the escape commands for each part of the sequence could be 1 or 2, depending on which version the opponent does. Here is where the mind games of a really good King player comes in.

The chain-throw button mash technique is not new in Tekken 7. It is technique used by players to perform multi-throws with ease. It is done by simultaneously pressing all attack buttons (1+2+3+4) repeatedly during the sequence to input the command for each part of the chain, and is more convenient than memorizing all those long multi-throw commands.

But there is a simple solution to easily escape this – just press one (1).

If you look at the commands and escapes of Mexican Magma Drive 2, you will notice that five of its seven parts have two versions, and the escape varies depending on which version is done. Cobra Clutch, Reverse DDT, Reverse Special Stretch Bomb, Burning Hammer, and Screwdriver can be broken with a 1 or a 2.

If the King player decides to use the multi-throw button mash technique to perform the sequence, what would always register in the command is the first version, that is why the break would always be 1. Therefore, you have 5 windows to escape this multi-throw sequence.

So the next time a King tries to initiate a multi-throw on you, don’t panic. Unless you know the actual escape for the throw, just keep pressing 1.