The Grand Final was an all-Pakistani showdown. 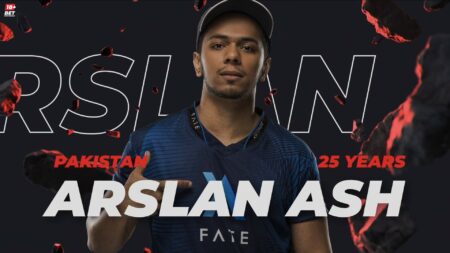 With the league hosting some of the finest Tekken players from around the world, Arslan powered through the likes of Kim “JDCR” Hyun-jin and Fergus “Fergus” McGee in the top 8 bracket and came out undefeated up to the final match.

The Grand Final was a fated rematch against fellow Pakistani Awais “Awais Honey” Iftikhar. Though Awais was fresh off a 3-1 win against JDCR in the Lower Bracket Final, Arslan was ready to take him down for the second time.

Right off the bat, Arslan Ash’s Zafina clawed through Awais’s pocket pick of Negan. Knowing that the Walking Dead character is slow and works off very committed attacks, the Red Bull/FATE player kept pressure with quick jabs and simple sidesteps, eventually taking two games with the use of jab extensions.

Even with Awais Honey going to his more preferred character of Akuma, Arslan already had his practice partner’s moves downloaded. After a flashy low parry and an instant block on Awais’s meter burn, the Zafina player backdashed and easily punished Awais’s dragon punch.

Awais Honey was able to get himself on the board with a proper application of his meter, but Arslan Ash mitigated his damage capability by picking an infinite stage for the final game.

Arslan Ash took charge of the final fight, garnering a two-round lead and leaving Awais to struggle with his own attacks. After a few pokes here and there, Arslan Ash closed out the series with an incredible duck and punish under the Genuine Gaming player’s meter-burn set-up.

With the championship win, Arslan Ash goes home with a US$15,000 cash prize and joins Dominique “SonicFox” McLean and Jonathan “Woahhzz” Vo as the Season 1 champions of the WePlay Fighting Ultimate League.

READ MORE: Knee trained in Pakistan just so he could beat the region’s own Tekken god later that year