Lidia Sobieska Tekken 7 Character Review: Now here’s a politician I would vote for

The Polskie karate master is a worthy roster addition. 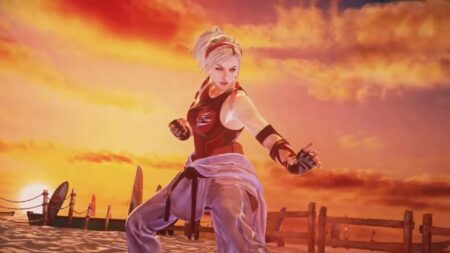 With previous releases like Fahkumram and Leroy Smith being tremendously broken, has Bandai Namco finally made a character that can’t be easily exploited for the quick win? Let’s find out.

Lidia at a glance

At first sight, Lidia is a determined karateka with a novel way to deal massive damage. Taking on the same karate stylings as the Mishimas and Jin Kazama, she offers a lot of the same thrills of catching opponents with high-risk, high-reward rushdowns.

The Polish prime minister is definitely a beginner-friendly character that is straightforward enough to learn after a few sparring sessions. Though the character has some easy go-to strings to pull out in a round, she does have a higher level of execution to unlock her bigger damage combos.

If you happen to grow your skills with the character, you’ll have the ability to perform just-frame moves, parries, and the like in the long run.

What does she offer as a fighter?

Lidia’s fighting style pushes players to be very aggressive and ready to throw out moves on the fly. Her db+2 karate chop works as an effective low poke like Dragunov’s d+2 that lets you dominate the neutral game. As a move that also goes into crouch, you can follow with mix-ups of a knockdown low with CR df+3 or a launching WS2.

As for juggles, Lidia brings out some interesting combat mechanics for launching. Her uf+4 hopkick goes immediately into corkscrew to take out a quick chunk of the opponent’s health while her 3,2 launch is a hit-confirm combo that works as a perfect whiff punish into a full combo. Her ff+3 launch is also a viable combo starter since it has a dashing movement that can catch any panic moves.

Another important part of Lidia’s arsenal is her stances. The two variations of Cat Foot stance (f+3+4 and b+3+4) help Lidia become a deadly mix-up machine.

Aside from their own sets of attacks, you can also draw CF out with the extensions of Heaven and Earth (During CF1 N, f) and Pouncing Tiger, Stalking Wolf (During CF2 N, f). CF1 and HNE unlock Lidia’s powerful high and mid options while CF2 and TAW unlock her quick hellsweep and risky, yet rewarding mids and lows.

While these stances become a bulk of your follow-up pressuring from jabs and strings, it leaves Lidia in a very vulnerable state. If you miss your attacks and timings, you can easily take a counter-hit from an opponent.

Lidia is also equipped with a heavy-hitting low sweep called Red Tape (db+3, 2) that’s perfect for controlling the neutral game and closing out rounds. To get the most out of this move, make sure you get a clean hit for the animated knockdown.

Despite being a new fighter, Lidia has some significant downsides that balance her out as a character. In exchange for her substantial damage output and offensive prowess, Lidia lacks in overall defense and keep-out mechanics like a magic 4 or a standard df+1.

Once Lidia is on the back foot, she struggles to gain the offensive front again because she needs momentum to set up her stance follow-ups and combo starters. Even with a few parries available, it’ll take a lot of practice and reading to get the timing down compared to easier parries like Leroy’s Twin Dragon Gate.

On top of her defensive downfalls, Lidia’s biggest weakness is her linearity when attacking. A lot of her advancing attacks like df+2 and ff+2 can be sidestepped, meaning that she’s prone to very defensive players who work off space for a counter-attack.

With that being said, Lidia’s glass-cannon playstyle doesn’t have to be as mindless as one would assume. With such flaws, Lidia pushes you to critically think about how you go about your offense and rewards you with some surprisingly deadly combos.

Lidia Sobieska is a worthy addition to the Tekken roster that offers familiar gameplay with karate combos and hellsweeps and also delivers some novelty with her more exclusive moves.

As a character with a fairly straightforward agenda, newcomers can learn the ropes of Tekken with Lidia while veterans can revel in her more advanced mechanics of extended stances and QCF inputs.

Lidia Sobieska is now available as DLC18 in Season Pass 4 of Tekken 7.