The Overwatch League will continue amid the coronavirus crisis. 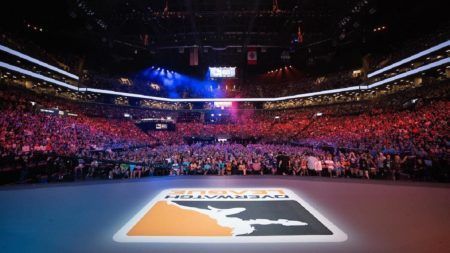 Following the cancellation of its live homestand events due to the ongoing COVID-19 coronavirus pandemic, the Overwatch League has released the schedule of online matches for March and April.

Under the new schedule, all Overwatch League teams will compete in three geographically-based regions in order to minimize latency issues for the new online competition format.

“The schedule was constructed to eliminate the need for travel while maintaining a level playing field for the teams, so all matches are taking place based in the regions where teams are currently residing,” the Overwatch League explained in a statement.

Each team will play the necessary amount of matches during this online portion of the season to catch them up to the total number of matches they had been scheduled to play through the midseason point of the season’s original schedule.

As a result, the teams in the Pacific Conference will generally play more frequently than teams in the Atlantic Conference. However, the league assured that the schedule “was designed to maximize fairness between teams, factoring in the total amount of matches played each week.”

“With teams playing by regional location, the schedule can no longer adhere to that breakdown. Some teams will play more than two matches against other teams, and some teams won’t play each other,” the Overwatch League added.

The league added that they are currently evaluating changes to the structure of this season’s playoffs to account for the disruptions to the original season schedule, including format and qualification.

“We appreciate the support and understanding of all our players, teams, fans, and partners as we continue to adjust our planning and scheduling based on new developments. The league plans to return to team-hosted homestand competitions in front of live audiences as soon as it is safe and logistically possible,” said the Overwatch League.

To view the full schedule of online matches for March and April, check here.

The coronavirus pandemic continues to disrupt the global esports industry. Aside from the Overwatch League, the League of Legends professional leagues in North America and Europe will also notably continue competition online to ensure the health and wellbeing of its teams and players.