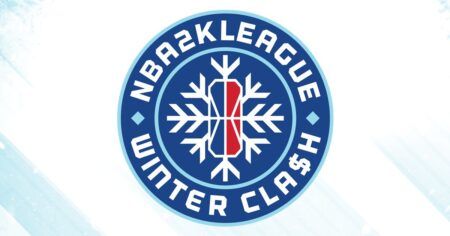 The NBA 2K League is hosting its first-ever Winter Cla$h online tournament, with action scheduled to tip off on December 5 at 7:00 a.m. GMT+8. Up for grabs is the lion’s share of a US$35,000 prize pool.

“This unique event will bring together some of the most recognizable personalities from the NBA 2K League, the 2K community, and beyond to showcase their skills in a variety of game modes on NBA 2K21,” Donohue added.

The NBA 2K Winter Cla$h will start off with a 5-on-5 NBA 2K21 Pro-Am match this weekend, featuring two Pro-Am teams comprising NBA 2K League players, NBA G League Ignite athletes, and influencers. One side is captained by Mavs Gaming’s Artreyo “Dimez” Boyd  with influencer AnnoyingTV, while the other team has Blazer5 Gaming’s Dayvon “G O O F Y 7 5 7” Curry and YouTuber ZackTTG at the helm.

The competition then shines the spotlight 16 fan-organized teams in the second stage on December 8-9. There will be eight teams in two brackets, split between PlayStation 4 and Xbox One X players. This stage will be played in a 2-on-2 format using NBA 2K21 Current Gen’s MyPark mode.

The winners and runners-up from the preliminary fan brackets will advance to the 8-team 2v2 MyPark Tournament main bracket on December 12. They will face off against NBA 2K League pros, NBA G League Ignite players, and influencers.

A top prize of US$5,000 will be awarded to the grand champions of the 2v2 MyPark Tournament for each console bracket.

The final stage of the Winter Cla$h, scheduled for December 19, will be another the 5-on-5 Pro-Am showcase.

Think you and your 2K squad have what it takes to go up against the global NBA 2K community’s best? You can still sign up until tomorrow, December 4, 12:59 p.m. GMT+8.

The NBA 2K League Winter Cla$h games will be livestreamed on the League’s official Twitch and YouTube channels, starting at 8:00 a.m. GMT+8 on each game day.

READ MORE: Lakers Gaming will have the first pick in the 2021 NBA 2K League Draft