The Indonesian coach has his eyes on other MPL regions. 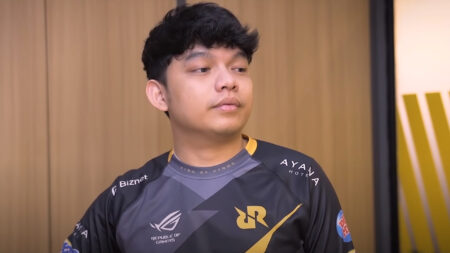 With Moonton updating the game significantly in the middle of every MPL season, teams from all regions get to see which heroes and compositions can bring home the win.

Just recently, MPL ID teams like RRQ Hoshi have discovered the new duo support meta, which utilizes two support heroes in the mid lane to support a better team fight instead of a full tank.

With RRQ Hoshi relying on a heavy support system for hypercarry Alberttt to shine, the meta was very compatible with their kind of playstyle.

The King of Kings can confidently pick previously overlooked heroes like Angela, Rafaela, and Estes when S-tier supports like Mathilda are banned.

Now adapting to the new meta, RRQ turned their season around in Weeks 4 and 5 with three sweeps against Aurafire, Bigetron Alpha, and ONIC Esports. The support duo dynamic of Psychoo and Vynnn was so captivating that even Alberttt felt like he was being too spoiled by his own squadmates.

After the series against ONIC, RRQ coach Adi Syaufian “Acil” discussed how he addresses the meta and believes that there is no standard meta in play right now. While RRQ Hoshi is finding success with the duo support playstyle, he states that there are still teams who can grab wins with hard tanks.

“The matter about meta always depends,” said Acil. “Now MPL PH and MPL MY are heading into the season grind, so I am also looking for references from there that I can use with my team.”