Celiboy and his crew are in the zone. 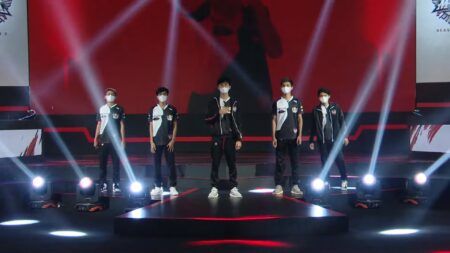 Alter Ego had an outstanding showing in Week 1 of MPL Indonesia, sweeping both RRQ Hoshi and Geek Fam ID.

When asked about their successful season start, AE’s players listed three reasons why they’ve started the season so hot.

As one of the few ID teams that stuck with the same roster, Alter Ego believes that the familiar line-up kept their chemistry intact. With only Ahmad missing from M2, the team still had that shared international experience to bring into the season grind.

Alter Ego easily showed their top form against defending champs RRQ Hoshi. With RRQ fielding a new coach and roster, the unchanged AE squad simply played their usual style and grabbed a solid sweep for their first win of the week.

Celiboy also ensured that RRQ Hoshi is still finding their form and even thanked them for the victory. Since Season 4, AE has always had a hard time facing the King of Kings with both teams trading sweeps with each other.

2. Celiboy’s usage of Harley in the jungle

Heading into the new season, MLBB’s meta has become much more flexible for most of the roles. Tanks like Baxia, Belerick, and Grock are now taking on the role of offlaner while players can now use assassins like Brody as a viable support.

Unfortunately, the jungle role is the one role that still seems limited in its hero pool. Players are usually stuck to playing the likes of Claude, Brody, and Yi Sun-Shin, but AE jungler Celiboy caught on to the trend of using Harley as a jungler and dominated with the Mage Genius in their match against RRQ Hoshi.

“The meta is pushing junglers to play Harley,” said Celiboy in the post-match interview. “There are a lot of tanky heroes compared to the few jungling options so Harley appears as a viable option now.”

Harley’s passive of Magic Master decreases the magic defense of opponents, making him useful against tanky offlaners. On top of that, the Mage Genius has a fast jungle clear and a homing ultimate that amplifies Harley’s magic damage and deals its own damage after a short period of time.

From the looks of it, Harley will become a more meta pick for junglers in the weeks to come.

3. The return of Ahmad and offline play

Carry player Ahmad saw the new season as a way to redeem himself after missing out on the M2 World Championship, where the team only reached the lower bracket semi-finals. Now returning to the team’s starting line-up, he felt thrilled to be able to play again with his teammates.

Ahmad also cited the MPL’s return to the offline competitive format as a big factor in their drive to win.

“Actually, I can’t say that the first week was smooth, but this is indeed our first time to play in an offline tournament again, especially with Udil,” stated Ahmad. “We were hyped and played in a more fun and relaxed manner on the actual stage.”

Alter Ego will go on to face Genflix Aerowolf on Friday, March 5.