The Thresh player lands his hook on a prestigious superteam. 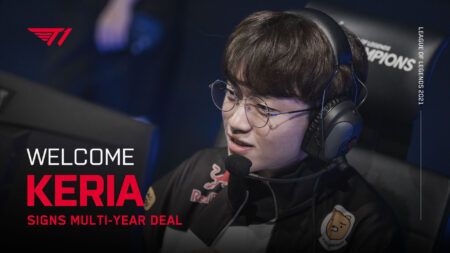 T1 has bolstered its 2021 squad with support player Ryu “Keria” Min-seok. This will be Keria’s second team after debuting in 2020 with DRX.

In his time with DRX, the team proved themselves as a young and hustling crew that could easily dismantle teams with their powerhouse offense. While they mainly played a funnel strategy into the mid-laner Jeong “Chovy” Ji-hoon, Keria and ADC Kim “Deft” Hyuk-kyu dominated the bot-lane. In just a year, the team managed to pull top-three finishes in both splits.

In the 2020 League of Legends World Championship, Keria and the DRX squad fared well in the group stage, qualifying in second place after LPL’s Top Esports.

In the knockout stage, DRX faced a LCK Summer Finals rematch against 2020 Worlds champions DAMWON Gaming. Despite their best efforts, DAMWON easily eliminated them with a 3-0 scoreline.

With Keria now joining the win-hungry team of T1, he’s more than ready for a spot in the starting line-up. The 18-year-old support will likely be handling the bot-lane with star ADC Park “Teddy” Jin-seong and may have a chance to try things out with ADC substitute Lee “Gumayusi” Min-hyeong.

While things are looking up for Keria, T1’s current situation of existing support Lee “Effort” Sang-ho is now put into question. With the LCK heading into a franchise format, we might see Effort move down to play for T1’s academy team.

Even though T1 had a lackluster finish to the 2020 season, Keria could provide a more consistent support system in the bot-lane that can take down the likes of DAMWON Gaming and Gen.G in 2021.