DRX’s Chovy on DAMWON: “I want to take them down” 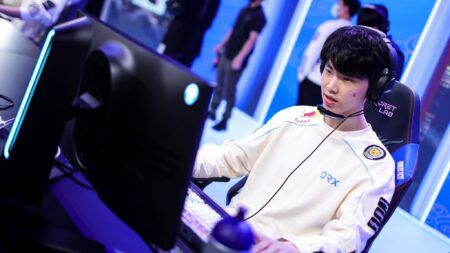 The 2020 League of Legends World Championship (Worlds) is now moving into its knockout stage. With DRX taking a hard-fought loss against TOP Esports in their last game, the team now faces fellow LCK team DAMWON Gaming in their next series.

ONE Esports was able to ask Jeong “Chovy” Ji-hoon what kind of insights he’s learned during the group stage. While DRX is one of the top teams coming out of the LCK, the team was only one game shy from overtaking TES for the top seed.

“Our performance was not that clean,” stated Chovy. “I mean it’s true that we can learn from losing, but I prefer to learn by winning.”

While we see many power picks like Syndra and Lucian going into the mid-lane, Chovy has brought out his signature Galio as a comfort pick in the drafting phase. While Zhuo “knight” Ding suffered a loss against NA’s FlyQuest on Galio, Chovy believed the team lost because of other reasons than the pick.

“If the game went without any accidents, I think they could’ve gotten the win,” said Chovy. “I believe that I’m pretty confident in the laning phase with this champion and if you can evenly scale with the opponent, Galio has substantially more options for bigger plays.”

With the interview happening right after the draw, we were able to ask Chovy’s thoughts on having an LCK finals rematch (DRX vs. DAMWON) at Worlds.

“I think DAMWON has a lot of momentum currently and they’re equipped with great mechanics so they were one of the teams that we wanted to avoid,” answered the DRX mid-laner. “Now that we are facing them, I want to do my best and take them down.”

As a young player who’s lauded as one of the best mid-laners of the world, coach Kim “cvMax” Dae-ho personally said that he’s one of the best players, regardless of role. When facing such star treatment, he believes that he should remain from being too arrogant and just stay humble and appreciate the praise of others.

When discussing cvMax’s unique and unorthodox ways of drafting ever since his time in Griffin, Chovy believes that his coach is experienced enough to make the right calls and that he’ll be the one to put his pick into effect on the Rift.

“I wish we can outdraft the opponent to our advantage, but at the same time, my role as a player is to make use of what we have,” replied Chovy. “For myself, I want to execute the best performance beyond the draft and in the game.”

With the Worlds stage being the pinnacle of competitive League of Legends, cvMax recently ditched his usual sportswear for a more dashing suit to look good for the cameras. While the coach looks more professional, Chovy finds it to be an unusual sight from what he’s used to.

“It’s nothing special, but at the same time, I always saw him wearing the same Reebok t-shirts,” said Chovy. “but now that he’s wearing a suit, I think it’s lowkey funny, I don’t know why.”

Seeing as how the DRX squad loves to talk about food in their videos, we were able to ask Chovy what dish he could never get tired of.

“If I keep eating the same dish, I get tired of it, but If I have to answer, I’ll have to say jjigae (stew),” stated Chovy. “If I get tired of one stew, I can easily switch it for another kind of stew that’s different.”

READ MORE: DRX Doran on JDG’s Kanavi: ‘He’s got an ego out of this world and we’re going to bring him down’