T1 is making moves to grab the Summoner’s Cup. 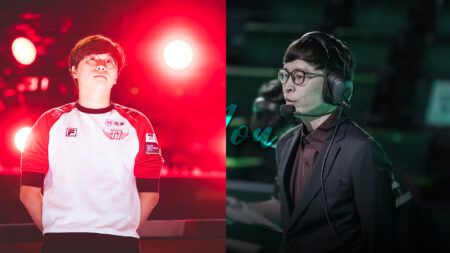 Former DAMWON Gaming coaches Yang “Daeny” Dae-in and Lee “Zefa” Jae-min, who just won the 2020 World Championship with the team, will be joining T1 for the 2021 season.

Zefa will be returning to T1 after serving as the team’s head coach for the 2019 season when he led Kim “Khan” Dong-ha, Kim “Clid” Tae-min, Lee “Faker” Sang-hyeok, Park “Teddy” Jin-seong, Lee “Effort” Sang-ho and Cho “Mata” Se-hyeong to the Worlds semifinals, where they lost to G2 Esports 3-1.

As head coach of DAMWON Gaming, Zefa was the head coach while Daeny was assisting. However, for T1 in 2021, Daeny will take the lead as head coach, while Zefa will be the “main coach” according to T1’s official announcement.

The former T1 jungler, aka “Faker’s right hand”, just completed his national service, and was recently seen streaming and posting photos on his official Instagram account.

The T1 academy team recently finished first in the LCK Academy Series in October 2020 under the guidance of Park “Sayho” Se-ho.

READ MORE: T1 responds to rumors of Polt and LS joining as coaches