Another world-class EU mid-laner steps up to the plate. 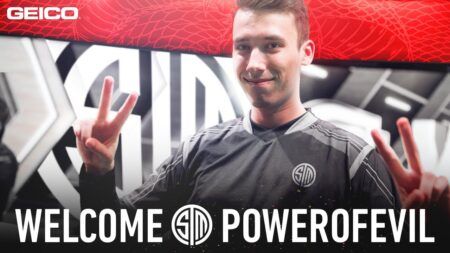 With Soren “Bjergsen” Bjerg retiring and shifting into the head-coach role, LCS powerhouse TSM has found a worthy replacement for the mid-laner in Tristan “PowerOfEvil” Schrage. The EU import is transferring after just one year with fellow LCS team FlyQuest.

TSM had a bittersweet end to their 2020 season. While the team finally returned to glory by grabbing their seventh LCS title in the Summer Playoffs, the team drastically underperformed at the 2020 League of Legends World Championship. Bjergsen and the boys managed to set a now-infamous record of 0-6 as a pool-one team at Worlds.

With such a letdown for the whole region, many fans and analysts will have high expectations for the new mid-laner to bring back the TSM’s top-tier status. But although the pressure might be on for POE, he’s definitely looking forward to joining the team.

“TSM is a great organization,” said POE. “Having Bjergsen as a head coach has a lot benefits for me as a mid-laner.”

From the looks of it, POE is shaping up to be an apt replacement for the Bjergerking. Taking part in two finals appearances with his former team, FlyQuest, the German mid-laner came first in kills at both the Spring playoffs (88) and the Summer regular season (83).

As for champion pools, POE doesn’t stray far from Bjergsen‘s usual picks. While the Zilean pocket pick might be long gone, POE still plays a lot of crowd-control mages like Orianna and Syndra while also utilizing mobility champions like Azir and LeBlanc. With almost a similar champion pool between the two, POE will likely fit into the team’s current take on the meta.

Despite being an already established name in the NA region, POE is just one of TSM’s many transfers in this free agency season. The team recently let go of Sergen “Broken Blade” Çelik and is looking towards getting an NA-resident top-laner along with a strong import support to aid Yiliang “Doublelift” Peng in the bot lane.