The Danish king of the mid-lane will be missed. 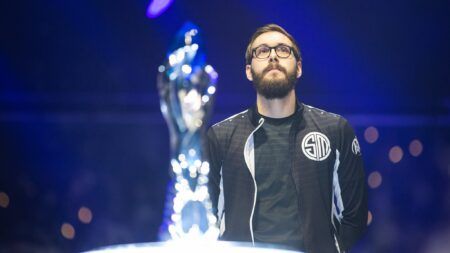 Søren “Bjergsen” Bjerg is a living legend in the competitive world of League of Legends. In eight years, the Great Dane has racked up six LCS titles, 4 MVP and All-Star awards, and has had five appearances in the prestigious League of Legends World Championship.

Now that he’s announced his retirement as a player to become the new head coach of TSM, let’s take a look back at five of Bjergsen’s best ever plays.

In IEM Katowice 2015, Bjergsen proved his power to the rest of the world, beating some of the finest mid-laners in an international setting. In the semifinals, TSM faced a worthy opponent in the Taiwanese team of Flash Wolves.

While Bjergsen and his squad lost the first game, the Danish mid-laner came back in game two with a defiant Zed. In a flexing dive made by Huang “Maple” Yi-Tang’s LeBlanc, Bjergsen immediately punished with a Death Mark and made a sweet escape with Living Shadow. Even though Maple was making his quick getaway into the bush, Bjergsen quickly switched with his shadow once again to snipe Maple for the solo-kill.

In his earlier years, Bjergsen built his reputation as a god-like mid-laner with his first team of Copenhagen Wolves. Even though the young talent signed up at the age of 16, Riot had instated age-restrictions for players, saying that Bjergsen had to be 17 in order to play. Despite CW suffering a nine-game drought during Season 3 of the European LCS, young buck Bjergsen turned 17 just in time for the last game of Week 4.

Against French team against All authority, Bjergsen managed to prove his worth in the mid-lane with just one amazing Syndra play. In a quick jungle clash, Bjergsen situated himself on the side and initiated a near-deadly Scatter the Weak on his opponent mid-laner. With the rest of CW charging in, the Syndra player timed his advance as a re-engage and chased down the remaining players for a debuting pentakill.

With that play, the Danish playmaker officially labeled himself as one of the best upcoming mid-laners in the world.

3. Bjergsen and Biofrost fly over Dignitas

While he usually takes on a utility role in the current meta, Bjergsen still flexes his ability to conquer the Rift with his fellow teammates. During a summer match against Dignitas, Bjergsen committed to an incredible dog fight with Corgi and Vincent “Biofrost” Wang’s Yuumi as his co-pilot.

With TSM already on soul-point, the Corgi player flew straight into the dragon pit and shot DIG ADC Johnsun down for the 4v5 advantage. As the fight continued, Bjergsen rained bullets and missiles onto those who were stuck in the pit.

While two DIG players got away, the Corgi player flew into range with the help of Yuumi’s movement speed boost and took them out in high-flying fashion. Despite his gun-toting skills, Bjergsen only picked up a quadra kill due to Biofrost’s Aery killing off a retreating member.

2. Bjergsen slashes his way through a 1v2

Once Bjergsen made it across the lake and into the NA region in 2014, the league was ready to experience a new kind of mayhem in the Rift.

In a regular-season match against CompLexity Gaming, Bjergsen flexed his mechanics on the tilt-inducing champion of Yasuo. Confidently going into a 1v2 skirmish in the top lane, the Yasuo player baited a chase and immediately turned around for a pinpoint tornado-Last breath combo.

After taking down his first target in Kez’s Elise, Bjergsen danced around Westrice’s Renekton and managed to heal himself by clearing a minion wave with Steel Tempest. With just one more knock-up on Westrice, Bjergsen conquered the 2v1 and solidified his status as one of NA’s finest mid-laners.

1. Bjergsen lands a three-man scoop with a double-kill on top

While TSM had its ups and downs during the 2020 season, Bjergsen always put in 200% effort to lead his team to victory. During a tense playoff series against the new and improved Golden Guardians, Bjergsen was the X-factor that incited TSM to reverse-sweep the series.

In just one clinical mid-lane play, Bjergsen’s Azir turned the tides of the potential final match with a quickfire Emperor’s Charge, scooping back half of the GG squad. To add icing to the cake, he also picked up a double-kill on both of GG’s carries.