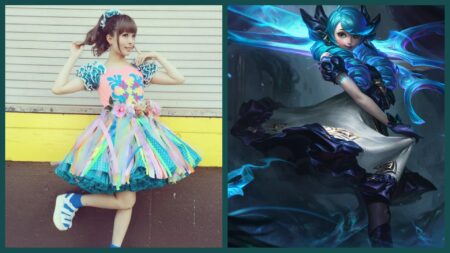 League of Legends fans have been raving about the game’s newest anime-looking champion Gwen after Riot Games announced her official release. The international community are looking forward to her debut on the Rift so much that they already discovered a J-pop Easter egg in one of her animations.

It is a known fact among LoL players that each champion has its signature dance animation, with different references in pop culture and music. Gwen’s dance animation, in particular, was based on the viral J-pop song “PONPONPON” performed by Japan’s kawaii (cute) singer Kyary Pamyu Pamyu.

Kyary Pamyu Pamyu is Japan’s trendsetter in decora fashion, a fashion style that shows colorful accessories and eye-catching hues — a typical sight in the streets of Harajuku, Japan. We won’t be surprised if Riot Games based Gwen’s Space Groove skin on Kyary Pamyu Pamyu too!

Upon closer inspection, Gwen actually has many similarities with Kyary Pamyu Pamyu in the “PONPONPON” music video. Both of them have big eyes, a kawaii face, and a twin-tail hairstyle. Gwen, the Hallowed Seamstress can actually pass up as Kyary Pamyu Pamyu’s in-game version!

Aside from Gwen, other LoL champions have referenced different artistes too like Twisted Fate who adopted K-pop superstar Psy’s Gangnam Style as his own dance move. Riot Games sure knows how to integrate secrets and interesting Easter eggs in League of Legends!

Gwen will be released in League of Legends Patch 11.8, which should go live sometime around mid or late April. In the meantime, fans can listen to “PONPONPON” while waiting for Gwen’s release date.