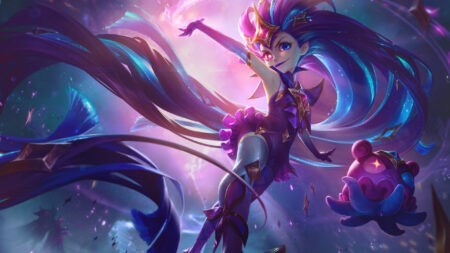 It’s written in the stars that Zoe is one of the most annoying LoL champions to face in the mid lane.

She naturally pressures enemies in the early levels and instantly catches you flatfooted with her Portal Jump setups.

3 best champions to counter Zoe in the mid lane

Galio swoops in as a defensive juggernaut

Galio is a tank champion that fares well against the cosmic nuisance.

Galio’s moves work best on the counterattack. After Zoe attempts to poke with her skills, Galio can close in and deal damage with the Justice Punch + Winds of War + Shield of Durand combo.

Even if you’re wary of accidentally walking into a Sleepy Trouble Bubble, Galio still has a lot of defensive mechanics to mitigate the disable, such as Justice Punch’s dash and Shield of Durand’s damage reduction.

Since you’ll take a bulk of the mage champion’s magic damage and disables as a tank, you can equip Galio with Mercury’s Treads to get you through sleepy situations in the mid lane and skirmishes.

Syndra is another viable counter thanks to her long-ranged attacks and skills.

Syndra can use Zoe’s positioning as a way to dish out a lot of damage. While she’s setting up her skills, you can place a dark sphere on top of her or use Force of Will to hurl over a minion and hinder her movement.

Once Syndra reaches level 6, all you have to do is continue chipping her health down with your skills. If she doesn’t recall, you can go in for the kill with Syndra’s ultimate, Unleashed Power.

Zed sneaks around shadows for the perfect kill

Zed is one of the strongest counters to the Aspect of Twilight because his skill set allows you to move around her early pokes.

When the mage champion clears waves with Paddle Star, Zed can deal damage and zone her out with a Living Shadow. The Living Shadow also casts Razor Shuriken and Shadow Slash so make sure to place it near her for a quick skill combo.

At level 6, the Portal Jump has got nothing on Zed’s deadly ultimate, Death Mark. You can dive in with the ultimate, utilize the same attack combo, retreat safely with Living Shadow, and watch Death Mark detonate after three seconds as the killing blow.

For items, it’d be best to equip Maw of Malmortius on Zed to have a good amount of attack damage and magic resist, as well as a magic damage shield that can help you through long fights.

Once you force Zoe to play defensively with such aggressive tactics, the initiative to push lanes and create space is pretty much in Zed’s hands.