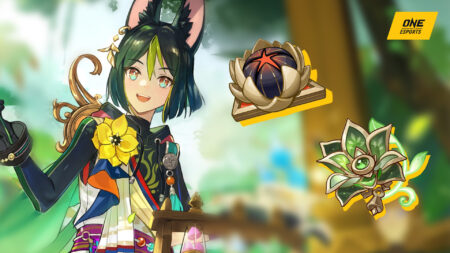 We hope you’ve stocked up on your fragile, condensed, and original resin because we’ll be spending a lot of time farming for Genshin Impact’s new Sumeru artifacts.

Here’s everything you need to know about the Dendro region’s artifact sets, including their locations, how to farm them, and which sets work best for characters.

To unlock this domain, teleport to the Statue of The Seven near Gandharva Ville and climb your way up. Then, press F to open the domain.

How to farm Sumeru artifact sets

Be sure to bring Electro, Cryo, and Hydro characters to your party to efficiently clear this domain of blessing.

Finally, an artifact set that’s made just for Dendro characters!

When you trigger an elemental reaction, the Gilded Dreams 4-piece artifact set gives buffs based on the elemental type of the other party members.

It will grant a 14% ATK buff for characters who share the same element while it will give an additional 50 Elemental Mastery for each character with a different element.

This artifact set works great for all damage-support characters like Kaedehara Kazuha and Sucrose, as well as those that trigger elemental reactions like Xiangling.

READ MORE: How to make Condensed Resin in Genshin Impact