Hot and cheesy! An official Pizza Hut and Genshin Impact collab is in the works You’ve seen KFC versions of Diluc and Noelle, now get ready for Pizza Hut versions of Eula and Amber.

Pizza Hut and Genshin Impact’s upcoming collaboration go hand-in-hand like a good slice of pizza. Fast food restaurants and video games are intertwined, and recent partnerships between the two industries prove it.

The official Pizza Hut Weibo account confirmed that the fast food company is working on a project with HoYoverse to deliver fans content that’s fresh from the oven.

The Chinese video game company has previously teamed up with KFC, where a few of the fried chicken chain’s branches were decorated with character standees during the limited-time collab.

The Knights of Favonius’ Reconnaissance Company captain and Outrider will be headlining the collab according to leaks. Unofficial photos show illustrations of the Cryo-Pyro pair wearing a chef uniform and Pizza Hut-branded clothing. Eula is printed on a large mouse pad while Amber is printed on what looks like a paper placemat. These designs will most likely be featured on other collaborative merchandise and decors such as button pins, standees, and postcards, similar to the KFC and Genshin Impact limited-time event. HoYoverse might also release a new glider design patterned after Pizza Hut’s branding. Ultimately, travelers are hoping both leaked illustrations will be adopted as in-game skins.

In response to the leaks, Pizza Hut China confirmed the collaboration in a Weibo post.

“Yes, we have a collaboration with Genshin Impact and are in the midst of preparing,” the pizza company posted. 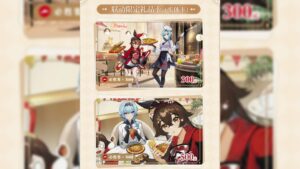 HoYoverse confirmed that the collaboration will begin on August 29 and will end on September 17 in Pizza Hut stores around China according to their latest Bilibili update.

READ MORE: How to make Condensed Resin in Genshin Impact