Evil laughs all around. Warning: Major spoilers if you haven’t played through the Enkanomiya region

HoYoverse pulled off a comical April Fools’ joke on the Genshin Impact community in the form of a full-length character demo for Enjou.

You might remember Enjou as the secret villain in the “From Dusk to Dawn in Byakuyakoku” quest series. You first meet him as a human scholar, but he eventually betrays you and shows his true form, a Pyro Abyss Lector. 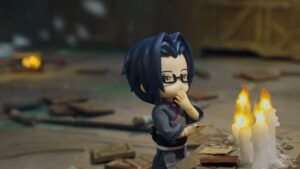 Just like every character demo, the scholar’s video gives us a brief background of his story and motivations.

While many characters experience tragic events or possess the power of the Archons, Enjou’s main goal in life is to find a particular book. Plain and simple.

HoYoverse amps up its creativity by retelling the Abyss Lector’s story in stop-motion clay animation. Enkanomiya is transformed into a “chibitastic” world, doing away with its original haunting atmosphere entirely. Enjou even gets his own Sailor Moon-esque transformation into the Abyss Lector.

Despite his villainous ways, the Abyss Lector was an unexpected highlight of my time in Enkanomiya.

His unique and witty dialogue had a sense of charm that made him more than just the typical Abyss opponent. His boss fight even ends with him accepting defeat and accusing Paimon of being a traitor. What a way to end a questline.

While the demo acts as a funny inside joke just in time for April Fools’, Genshin fans were psyched to see their favorite villain throwing Pyro balls again.

Since Childe technically counts as a playable villain, could there be a chance that Enjou is the next Pyro Catalyst? Your move, HoYoverse.

You can check out the full character demo down below: