Nurse Blissey at your service! 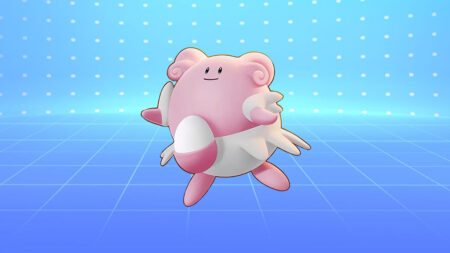 Blissey is downright adorable, but don’t let her cute demeanor fool you. She can single-handedly turn weak Pokemon into unstoppable powerhouses thanks to her support oriented moves.

Of all the support Pokemon available in Pokemon Unite, Blissey relies the most on her teammates. This reliance however, is also her biggest weakness since she can’t do much alone.

As such, Blissey is by no means a passive support in Pokemon Unite. To be effective, you’ll need to be active on the map. Here are the best builds, tips, tricks, and suggestions to help you slap Pokemon back to base like a boss.

Why you should pick Blissey in Pokemon Unite

As a support specialist, Blissey’s skill kit makes her the ultimate team enabler in Pokemon Unite.

She can roam around with a partner and pick up easy knock outs with Helping Hand, and keep her team topped up with Soft-boiled around objectives such as Drednaw and Zapdos.

She can also remove effects such as burns and slows from ally Pokemon with Safeguard, and break up fights with the displacement from Egg Bomb.

A great fit for pretty much every team composition in Pokemon Unite, you can’t really argue against having a Blissey on the team.

Buddy Barrier is a must-have held item that fits into any build for supports in Pokemon Unite.

The bonus shielding it provides to you and a low health ally helps to extend any engagements so that either you or the ally benefiting from Buddy Barrier can escape or use their key moves.

Being a bit of a chunky Pokemon herself, Focus Band’s emergency recovery mechanic in Pokemon Unite makes Blissey even harder to take down. The bonus health you get by simply equipping Focus Band is also a nice bonus to Blissey’s naturally large health pool.

Synergistic with Blissey’s huge health pool and natural ability to recover lost health with Soft-boiled, Rocky Helmet helps to dish out free ticks of reflect damage. Ideally, you only want to use this if you’re running Soft-boiled in your build.

If you’re laning with an experience-hungry Pokemon, or if you intend to selflessly give more experience to your team overall, Exp. Share will let you do just that. Having additional levels on Blissey is nice but in most cases, your teammates can utilize the additional experience much better.

An instant escape or re-positioning item, eject button is always a good choice if you’re unsure on what battle item to equip in your build.

Less common than Eject Button, Blissey can take a few hits thanks to her natural bulk. Helping Hand can allow her to run in and throw down a Slow Smoke in the middle of a fight to slow retreating foes.

1. Harass Pokemon in the early game

Being able to heal herself and her ally right from level one, Blissey can be a real pest especially in the early game.

Use this to your advantage, and pressure your opponents by poking them with her boosted attack which takes chunks out of early game health pools. Any damage done to Blissey or her ally can be healed over time, so you can save your valuable Sitrus berries for real emergencies.

On top of being a supportive Unite Move, Bliss Assistance can do quite a bit of damage when Blissey comes into contact with Pokemon while dashing.

To use her Unite Move optimally, you’ll want to position yourself so that you hit as many Pokemon as possible when dashing. Pokemon nearby Blissey will also be thrown, and take damage when her Unite Move is triggered.

3. Tank it up in Pokemon Unite with Soft-boiled

In some situations, support Blissey can sit in the front lines and soak damage for her team if she skilled Soft-boiled.

Blissey in most cases will be wandering around with full health since using Soft-boiled heals her too, this means she can take some hits for the team when necessary.

This includes body blocking single targeted attacks, such as Greninja’s Water Shuriken, or tanking Drednaw while her team finishes him off.

A common yet versatile support build that can be run in pretty much any matchup, you sacrifice experience and offence for powering up your team to over 9000.

Blissey players can do two things with this build: Either stick with the team and focus your attention around objectives, or follow a strong roaming ally around providing support while getting pick offs.

Regardless of which playstyle you pick in this build, your role is going to remain the same. Keep your teammates topped up with Soft-boiled and pop Helping Hands off to further support and power up your allies.

Although Bliss Assistance is a great defensive move, don’t be afraid to use it to further buff a teammate’s Attack or Sp. Atk to swing a team fight in your favor.

Depending on what Pokemon are present on the enemy team, you may need to sit further back to not to get blown up by a combo. Only throw in basic attacks if there are no Pokemon around who can punish you for it.

Swapping out Soft-boiled for Safeguard, enemy compositions in Pokemon Unite that lack disables and slows get absolutely wrecked by this support build, especially when paired with heavy hitters like Garchomp.

This build’s overall playstyle is still very similar to the pure support Blissey build listed above — stay with the team or roam with a partner. Since you don’t have access to Soft-boiled for heals, you and your teammates will need to be selective with the engagements you take.

Figuring out when to use Safeguard is also very important when running this build, as it sits on a rather long cooldown. Breaking hard stuns should be your highest priority followed by slows.

Popping Safeguard on an ally to negate slows while chasing a target down is also viable as long as you don’t have any other disables to worry about.

Best Pokemon Blissey can combo with in Pokemon Unite

A match made in heaven, Garchomp is the biggest winner if paired up with a support Blissey because her kit synergizes so well with this late-game all-rounder.

We all know Garchomp is a monster once fully evolved, but disables and slows really limit this Pokemon’s potential. This is where Helping Hand and Safeguard comes in.

These abilities negate crowd control, which allows Garchomp to not only hit harder and faster, but also stay latched onto his target Pokemon. The additional healing and shields support Blissey provides is the icing on this cake.

If you thought Cinderace was annoying before you better think twice. Cinderace is another Pokemon who benefits highly from Blissey’s support kit,

Helping Hand is the real kicker to this duo. How do opposing Pokemon touch a Cinderace if they can’t catch it, let alone go head-to-head when Blissey is nearby?

The sustain and power spikes Blissey provides lets Cinderace play much more freely knowing he has a safety net to fall back on.

A surprise Pokemon in this list, Gardevoir benefits from support Blissey a little differently compared to the usual hard hitting basic attackers.

Alone, Gardevoir can dish out some serious damage in Pokemon Unite, but easily gets nuked. Blissey solves this problem entirely with her movement speed buff and shields.

She enables Gardevoir to outrun pursuers, and land moves like Psyshock much more easily. On top of that, a Bliss Assisted Gardevoir hits like a truck. Don’t believe us? Try out this combo.