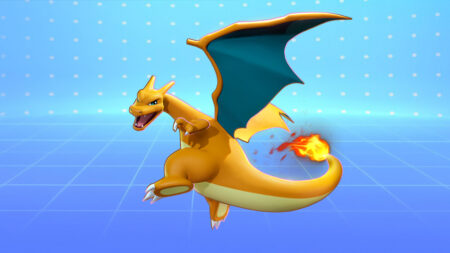 A crowd favorite, everyone’s favorite fire breathing dragon has made it to Pokemon Unite as a playable Pokemon.

At present, Charizard is possibly the toughest novice Pokemon to master due to his weak early game.

Though a little challenging to pick up in Pokemon Unite, if you follow all our tips, tricks, and suggestions, you’ll be blazing through your games in no time.

Why you should pick Charizard in Pokemon Unite

As an all-rounder in Pokemon Unite, Charizard’s above average stats and flexible skill kit allows players to adapt in every match.

He isn’t limited to hitting the jungle or staying in lane, since he excels at clearing wild camps and controlling chokepoints in Pokemon Unite.

He’s an awesome roamer if he can secure early levels after a jungle rotation, and is fantastic at securing objective Pokemon such as Zapdos, thanks to his natural bulk and consistent damage output.

Dare to disable Pokemon with Fire Punch and Flare Blitz, or burn them to smithereens with Flamethrower and Fire Blast. Charizard comes to life when he uses his Unite Move which turns him into a terrifying health stealing fire breathing monster!

He is already threatening when his Unite Move is active, and even more so with Energy Amplifier, which further boosts Charizard’s total damage output for the first four seconds of Seismic Slam. It is a must-buy item if you desire a damage-centric build.

Since he has a fair amount of natural bulk, Charizard benefits from any bonus shielding, particularly if he finds himself constantly in the middle of the action.

This item, on top of his Unite Move’s bonus, gives him more opportunities to dive the opponent’s squishy backline since he can tank more damage.

The bonus movement speed from Float Stone mainly comes into play when you rotate for major objectives such as Drednaw, Rotom, Zapdos, and even last minute scoring.

This is a valuable item that helps you get to key points as quickly as possible, since games in Pokemon Unite last only 10 minutes.

Eject Button should be picked up in 99% of Charizard’s matches. The ability to blink helps out with his horrendous early game mobility, allowing for quick getaways or to chase down fleeing Pokemon. When in doubt, always pick Eject Button.

An alternative item if you don’t have access to Eject Button yet.

Ideally you should only choose X Attack if you’re building around Charizard’s offensive capabilities.

1. Charizard is a late-game Pokemon

Unlike faster evolving Pokemon, he is a late bloomer in Pokemon Unite. He is rather weak until fully evolved. Focus on levelling up by clearing wild camps and scoring points when it’s safe to do so.

2. Basic attacks can splash onto other Pokemon

Charizard’s basic attack hits all targets in range for full damage. Use this to your advantage and position yourself so that multiple Pokemon are hit with your basic attack. This also applies to his basic attacks during Seismic Slam.

3. Travel over walls with Fire Punch and Flare Blitz

Make for some sneaky ganks or goals by travelling over non-traversable terrain and walls with Charizard’s basic skills. Keep in mind Flare Blitz will only work this way if there is a targetable Pokemon within range on the other side.

Since his basic skills become disabled during Seismic Slam, use Flare Blitz before triggering his Unite Move. The bonus shields from Flare Blitz and Seismic Slam stack allow you to absorb even more damage in team fights.

This is a fun Pokemon Unite build that allows Charizard to become active on the map since he can initiate fights with Fire Punch, and sustain with Flare Blitz’s shield.

Unless your team is running early game Pokemon such as Zeraora who needs the jungle, you ideally want to take both jungle buffs early on, and farm up wild camps until you unlock Fire Punch.

Once you have it, hit one of the lanes and land a surprise knock out.

It’ll be all on you to control enemy Pokemon at Drednaw and Zapdos fights, since everyone will tend to clump up. Your job is to act as a wall between your team and enemy Pokemon. Try to hit the squishy backline if an opportunity presents itself.

Keep in mind that you sacrificed some damage for gap closing and sustain with this build, so you want to avoid going for solo kills on tankier Pokemon who can survive your combo.

Roam around the Pokemon Unite map and aim to knock out squishies even if they have an escape mechanism. Very few Pokemon can escape a melee Charizard constantly shoving into them.

This Pokemon Unite build centers around dishing out as much damage as possible from a distance.

If your team can’t spare the jungle for you, you’ll want to head into the Drednaw lane and farm up as much as possible until Drednaw spawns. Only play aggressively if you feel you and your lane partner can comfortably pressure your opponents.

Once Drednaw spawns, your role is to control the fight with well placed Fire Spins or Fire Blasts. The damage over time and slow will deter your opponents from freely initiating. Don’t forget to chip their health away with Flamethrower from a distance.

Keep clearing Pokemon camps, but stay close to the team, for this build doesn’t provide any hard disables outside of Seismic Slam, which you don’t want to use without purpose. You need to rely on your allies to help set up any knockouts.

When it spawns, treat Zapdos like Drednaw. Use Fire Blast at chokepoints or on stunned Pokemon, and keep firing away with Flamethrower.

Best Pokemon Charizard can combo with in Pokemon Unite

Charizard and Snorlax are like two peas in a pod in Pokemon Unite. Charizard’s biggest problem is being kited and Snorlax patches that problem up.

Absorbing a lot of the incoming damage, Snorlax helps to set up for easy knock outs with slows and sleeps whilst pulling attention to himself and away from teammates.

What’s more terrifying than seeing a Charizard and Snorlax run at you in a team fight? We all know how that ends…

Eldegoss is the perfect lane companion for Charizard when he’s still an itty bitty Charmander. Healing, shields, slows, you name it. Though she doesn’t provide much offense herself, Eldegoss is a real mean enabler who can get Charizard through even the toughest of games.

Don’t underestimate Eldegoss, it’s usually the cute ones who are the real killers.

Another support Pokemon on the list, Wigglytuff enables Charizard to play much more aggressively thanks to her skill kit.

Sing can help lock Pokemon down for Charizard to finish off, whilst her Unite Move can be used either to get Charizard out of a sticky situation or excel in fights around an objective.