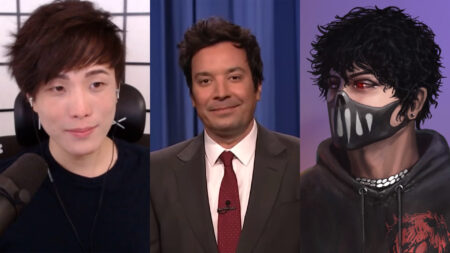 From the TV world, Fallon was joined by Ahmir “Questlove” Thompson, Kirk Douglas, and Tariq Trotter from The Tonight Show’s house band, The Roots, as well as Stranger Things actors Gaten Matarazzo (Dustin Henderson) and Noah Schnapp (Will Byers).

Livestreaming superstars Rachell “Valkyrae” Hofstetter, Sykkuno, and Corpse Husband, together with Among Us community director, Victoria Tran, filled up the final slots of the lobby.

Fallon and his crewmates played through a few rounds with all mics on, leaving many to commit some dastardly callouts in the Skeld.

As everyone went on with their tasks, innocent crewmate Jimmy spotted guitarist Kirk jumping through a vent and exclaimed to his crew that he was indeed the impostor.

With the streamers and the community director knowing how big of a party foul this is, the veteran members chuckled their way throughout Jimmy’s frantic emergency meeting.

Still a rookie at the game, Jimmy engaged in some daring moves as a first-time impostor. After tailing Valkyrae in the tight hallways of the new Airship map, he went for a risky kill onto Sykkuno, who was standing right next to Corpse Husband.

Once Corpse Husband reported the body, the talk show host did his best to redirect the blame to other players, but it didn’t work out so well. Seeing the desperation in his eyes, Valkyrae was willing to skip the vote to give Jimmy another chance, but the remaining crewmates eventually voted him out for a quick impostor elimination.

After the star-studded charity stream, Sykkuno shared his thoughts on stream about getting eliminated by Jimmy Fallon.

“I did not expect that,” said Sykkuno. “I kind of like the way he plays; he does crazy stuff just like I usually do to try and spice things up. I think killing in front of someone may be a little too crazy, but it was fun.”

READ MORE: Is this 2013 survival game this year’s Among Us?