Here’s our first look at Magic: The Gathering Arena on mobile 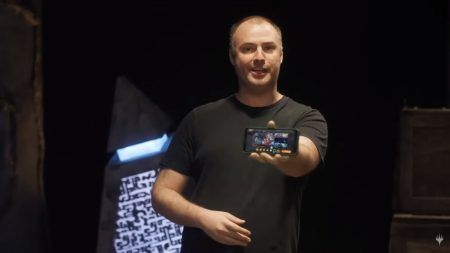 A recent Wizards of the Coast’s stream with American host and streamer Sean “Day9” Plott has given us our first look at the upcoming Magic: The Gathering Arena on mobile.

For about a minute and a half, Day9 teased the viewers about the game, and even showed a quick glimpse of how the game looks on a smartphone.

He did not drop any other details about the date of the mobile port, but he assured fans that it would be coming very soon with its refined state as seen on the image of its gameplay.

The behind-the-scenes video also presented fans a quick look at the menu of MTGA mobile which looks like a direct copy of the card game’s desktop version.

Hasbro has confirmed in an earnings call last February that MTG Arena would be coming to iOS and Android devices later this year.

CEO Brian Goldner is delighted to have MTG finally available on smartphones, according to David McCoy.

“Magic Arena will move to mobile in 2020,” Goldner said on the call, also expressing that it’s “incredibly exciting as [this will] give more people access to Magic Arena.”

Here is the full video of The Zendikar Adventuring Party featuring a thorough look at the new card set, an overview of the company’s plans for the next months, and our first look at MTG Arena on mobile.

READ MORE: Magic: The Gathering Arena is coming to mobile this year