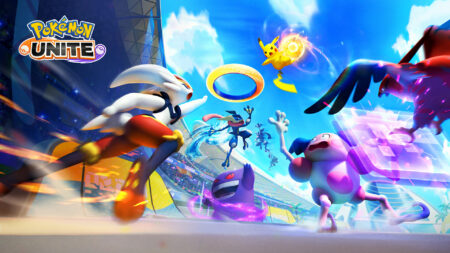 It’s the dream Pokemon game we always wanted! Pokemon Unite lets players battle against each other in real-time as their favorite Pokemon.

A lot goes on in a game of Pokemon Unite and it can get especially confusing for someone who isn’t familiar with the MOBA genre. Luckily for you, our complete beginner’s guide to Pokemon Unite will get you up to speed in no time.

What is Pokemon Unite?

The newest title to hit the MOBA scene, Pokemon Unite pits players against each other in teams of five. These ten players then battle as their favorite Pokemon in real-time.

The word MOBA stands for Multiplayer Online Battle Arena. It’s used to describe games where players face off against one another in teams, usually in fives, like Dota 2 and League of Legends.

At the start of a MOBA game, players will need to level up their characters by defeating enemy players or AI-controlled characters. This usually takes place in one of the lanes found on the map.

The word lane describes the pathways that go from one side of the map to the other; top lane and bottom lane in Pokemon Unite’s case. Both teams will then battle it out until one of them meet that particular game’s win condition.

How to win in Pokemon Unite?

Pokemon Unite is all about scoring points and in order to win, your team needs to score more points than your opponents in the 10 minute time limit.

You earn points by either knocking out wild or player-controlled enemy Pokemon and scoring them into one of the enemy team’s goals.

What Pokemon should I pick in Pokemon Unite?

With so many Pokemon to choose from in the shop, you’re probably beginning to wonder who is worth your hard earned Aeos coins.

Don’t panic if you’re confused about what kind of Pokemon to play. With five classes available to pick from, there will certainly be one that will suit your playstyle whether you’re a beginner or a veteran.

If you love to see big damage numbers from afar, Attacker type Pokemon is right up your alley.

Offense is everything for Attacker type Pokemon. They are in charge of dishing out most of the team’s damage in Pokemon Unite.

As one of the squishier classes however, they need to be protected from Defenders and All-Rounders who can tank through the damage.

The assassins of Pokemon Unite, their natural mobility allows Speedsters to not only dance around most Pokemon with ease, but also get some sneaky scores in when nobody is watching.

They’re strongest at the start of the game, where they can bully most Pokemon until they start evolving.

Though Speedsters aren’t too beginner friendly, consider using Zeraora if you want to give the class a try.

Get in your opponents face and brawl non-stop with All-Rounder Pokemon.

Having a good balance of offense and defense, All-Rounders are great Pokemon for players who enjoy changing their playstyles on the fly with their flexible movesets. They’re hard to knockout, and are absolutely terrifying if they catch the enemy Attacker or Speedster.

Out of all the All-Rounders available, Lucario has the most forgiving and beginner friendly playstyle thanks to his natural bulk and move options.

Tanks of the world unite, for Pokemon Unite has graced us with the big, beautiful and deadly Defender Pokemon. Essentially walking walls for the team, a Defender type’s decisions can make or break teamfights.

Not only do they soak a lot of damage in the front lines, they can help set knock outs up with disables, draw the enemy’s attention away from teammates, and block the enemy from taking important objectives.

Blastoise and Snorlax are great picks for beginners wanting to dive into the Defender role in Pokemon Unite.

Not much of a fighter? No problem, you can support your team instead with buffs, provide shields, and heal with Supporter Pokemon.

They might look cute and cuddly but be warned, Supporter type Pokemon can make a whole team hit harder, faster, and be tougher to knock out with their support based moves. Nobody will say no to having a Supporter on the team.

How to play Pokemon Unite?

The three main objectives you’ll be carrying out in a game of Pokemon Unite are:

The most important out of these three is scoring, because ultimately the team that scores the most points in the 10-minute match is the winner.

When the game starts, you’ll want to pick a lane and start knocking out wild Pokemon for experience to evolve and points to score.

Do your best to score points whenever you can, but only when it’s safe. The enemy team gains extra experience if they manage to knock you out. Likewise, if you can knock them out too.

At seven minutes, the two objective Pokemon, Rotom and Drednaw, will spawn at the top and the bottom of the map. Do your best to try and knock these Pokemon out because they reward extra scoring points. What’s more, their effects will benefit you and your team.

When the match has two minutes left, Zapdos will spawn in the middle of the map and all points scored from here on out are doubled! Even if your team is behind, scoring a few double dunks can still win you the game.

There are two types of items players can equip in Pokemon Unite: Held items and battle items.

Held items provide passive bonuses like extra stats or effects to its holder. These effects can include bonus critical hit rate, additional health, and damage reduction.

Up to three held items can be equipped at any time, so don’t be afraid to mix and match depending on you team composition and your playstyle.

Battle items are items that can be activated at any point in the game to benefit the user. Think of them as an extra move.

This includes temporary stat boosting battle items like X Attack and X Speed, or additional moves like the slowing cloud from Slow Smoke. Only one battle item can be equipped at any time.

Which lane do I go to in Pokemon Unite?

The general rule of thumb for lanes in Pokemon Unite is there should always be two Pokemon in both top and bottom lanes and one Pokemon in the central area.

Attackers who are weak early on would want to play in the top lane for experience rather than the bottom lane, since it can get hectic down there when Drednaw spawns.

Speedsters and All-Rounders can also play in the top lane if your team is missing an Attacker, or they’re in a different lane.

The second Pokemon in the lane needs to be able to protect their partner. Defenders are the ideal top lane partner but a Supporter Pokemon works as well.

Bottom lane is where all the action is, and you’ll do well with Pokemon who can brawl early on.

All-Rounders are the perfect Pokemon here because they can take a few hits and dish out good damage. An Attacker can replace the All-Rounder, but will need to be extra careful to not get caught out when a fight breaks loose.

What do I do in the Central Area?

Knock out the Lilipup at the beginning of the game, then take the power up from Ludicolo. This buff will help you take out wild Pokemon quicker.

Take out Bouffalant for his buff, which reduces defence, then knockout the two nearby Corphish to gain a quick level five.

At level five, head to the closest lane and look for an opening to knock out an enemy Pokemon by popping out of the bush.

What are the objective Pokemon?

Unlike wild Pokemon, objective Pokemon give buffs, effects, or provide help to the team who got the last hit that knocked it out.

Spawning in at seven minutes, Rotom can be found at the top of the map.

If your team gets Rotom, he will slowly move towards the enemy’s goal and attack any enemy Pokemon standing in his way. If he reaches the goal, he will add 20 points to the goal and allow your team to instantly score points in that goal for a short period of time.

Also spawning in at seven minutes, Drednaw can be found at the bottom of the map.

Teams that secure Drednaw gain a temporary shield and an experience boost for all ally Pokemon. It cannot be stressed enough that giving a free Drednaw away is a huge mistake! Always be ready to fight for Drednaw with your team when he spawns.

Only spawning in the center of the map during the last two minutes of the game, Zapdos is the MOST important objective Pokemon in the entire game.

Whichever team that gets the final hit on Zapdos immediately gets 20 points each and can instantly dunk points on any goal for a short time. Even if your team is losing horribly, there is always hope if you can snipe Zapdos!

Gameplay guide: Tips and Tricks to get started in Pokemon Unite

1. Only one Pokemon should go to the central area at the start of the game

The whole point of having one Pokemon in the central area is so that it can quickly level up. Sharing the experience here defeats the purpose of the central area. If you see someone walking to the central area at the start of the game, you’re better off picking a side lane.

2. Don’t fight on top of the enemy’s goal

Unless your team massively outnumbers the defending Pokemon, it’s never worth trying to fight Pokemon whilst standing on their goals. The free healing and shielding they get from standing on the goal will make it in most cases too hard to knock them out.

If your Pokemon needs a quick pick-me-up, score a goal if nobody is around. It doesn’t matter how many points you score, so long as your Pokemon gets a slam dunk in the goal zone, you get a bit of health back. This is useful if you want to save your Sitrus berries, or don’t want to teleport back to base.

4. Use the grass to launch surprise attacks

The grass isn’t for decoration, folks. Pokemon standing in long grass are hidden from the enemy making it a perfect tool for ambushes. You can even use it to escape enemy Pokemon in a chase. Taking out a Pokemon in lane makes it easier for your team to score some extra points.

5. Only the final hit on objective Pokemon count

Objective Pokemon belong to the team who get the last knock out hit — not whoever does the most damage. Don’t be afraid to save a hard hitting move to steal away that Drednaw or Zapdos from the enemy team!

6. Top up your Pokemon Unite knowledge by revisiting the tutorial

If at any point you forget how something works, you can revisit the Pokemon Unite tutorial. The tutorial can be found under Practice at the top of the menu bar.